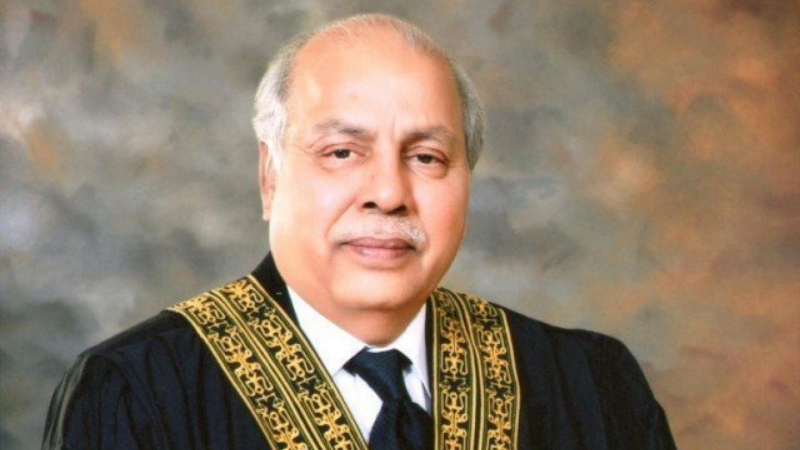 Chief Justice of Pakistan (CJP) Gulzar Ahmed on Friday questioned the Defense Secretary over the commercial use of military land and asked whether structures such as cinema halls and wedding halls were built for defense purposes.

A three-judge bench headed by Chief Justice and Justice Qazi Mohammad Amin Ahmed and Justice Ijazul Ahsan was hearing the issue of using military land for commercial purposes in the Karachi Registry of the Supreme Court.

The CJP questioned Defense Secretary (retd) Lt Gen Mian Mohammad Hilal Hussain about the activities being carried out on the property. “This land was given to you for strategic and defense [purposes and yet] You have started commercial activities on it.”

He remarked that all the Askari housing projects have been built on Cantonment land.

“We have decided that this will not happen again,” the defense secretary said. He said that the construction of housing societies and commercial use of military land would be checked and stopped.

To this, Justice Amin asked Hussain how this would be possible and from where the process would start. The judge asked him to give a written explanation.

The Chief Justice remarked that the Colonel and Major were acting like kings. “Whatever the colonel and major want, that’s what happens,” he said.

“Go and tell all the chieftains [of the armed forces] The land meant for defense purposes will not be used for commercial purposes. Go to all the military cantonments and tell them that the land will be used only for strategic purposes,” CJP Ahmed ordered the Defense Secretary.

He also said that commercial activities were going on at Masroor base and Faisal base and high-rise buildings were constructed when the signboards were ordered to be removed.

The bench asked Hussain whether he had a written report regarding the matter, to which the secretary requested for more time to submit it.

The court adjourned the hearing till November 30, saying it would be held in Islamabad and also ordered a written report.

during the hearing of the case WednesdayThe Chief Justice had held that the conversion of Cantonment land into private land appears to be in direct violation of the Cantonment Act, 1924, Cantonment Land Rules, 1937 and various constitutional provisions and the issue needs to be heard and decided by the court.

The bench had expressed displeasure over such activities in the jurisdiction of the Cantonment Boards on Director Cantonment and Military Land, Karachi Area, Adil Rafi Siddiqui and asked them to inquire about the construction of a wall in the premises of a park at Defense Housing Authority phase. Report was also sought. -I.

Hearing other matters, the Chief Justice asked Karachi Commissioner Muhammad Iqbal Memon as to when the demolition work of Karachi’s Nasla Tower would be completed. Memon replied that no time limit could be provided and 200 laborers were working on the project.

The CJP asked him to do twice as much and ordered the tower to be demolished and the report to be submitted within a week.

An update was also provided to the bench about progress in the demolition of Tejori Heights Tower, with a legal representative stating that 60 to 65 percent of the building had been demolished.

He also told the court that files have been recovered from the offices of the building and work is on to pay compensation to the affected.