The Duchess of Cambridge Looked elegant in a coral coat dress as she teamed up Prince Edward and the Countess of Wessex to host a garden party at Buckingham Palace.

The trio stood in for the Queen, 96, who traditionally hosts four garden parties each summer but has bowed out of this year’s engagements amid ongoing mobility issues.

The annual garden parties, which are held between Buckingham Palace and Holyroodhouse in Edinburgh, are a way for the monarch to celebrate and reward those who have distinguished themselves in public service. They require the royal hosts to spend more than an hour on their feet as they make their way through the crowd.

The Queen, who will celebrate her Platinum Jubilee next month, is increasingly relying on senior royals including Prince Charles, the Duchess of Cornwall and Prince William to stand in her stead at high profile engagements.

Yesterday the Queen made a surprise appearance at the opening of the Elizabeth Line at Paddington Station, a week after she missed the State Opening of Parliament.

Today she was represented by the Duchess of Cambridge, Prince Edward, and the Countess of Wessex, one of Her Majesty’s most trusted confidantes. Her cousin, Princess Alexandra, also attended.

Kate, 40, who wore a monochrome Emilia Wickstead ensemble, appeared perfectly poised as she joined the Wessexes on the steps of the palace before making their way down to the lawn to greet guests.

Scroll down for video

Coral queen! The Duchess of Cambridge opted for a coral version of an Emilia Wickstead coat dress she has worn on a number of previous occasions 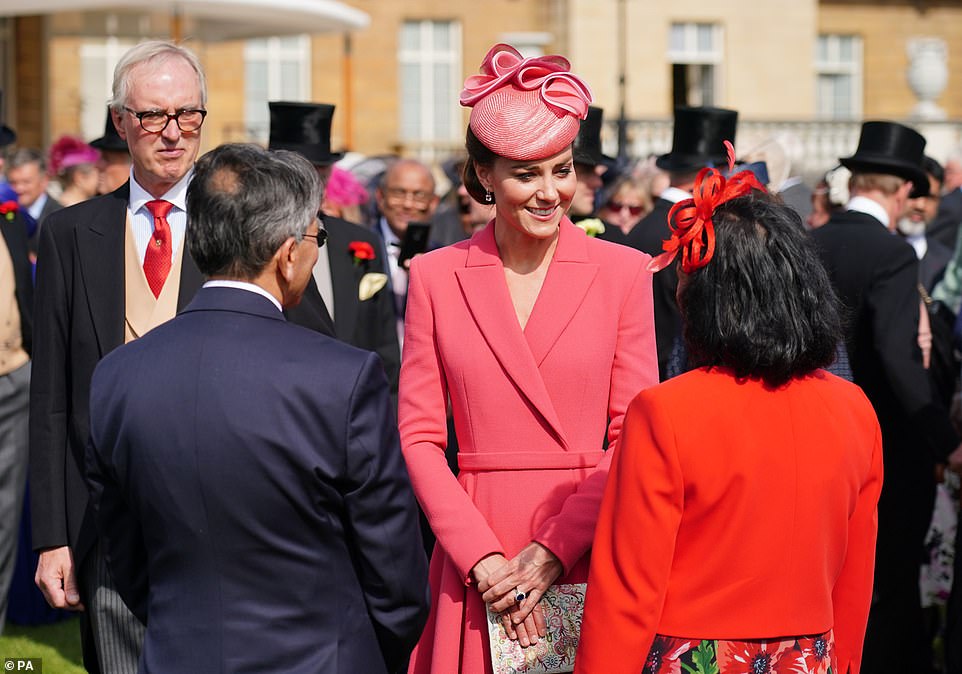 Meet the Duchess! Kate spent time speaking to guests at the garden party, which reccognises those who have distinguished themselves in public service 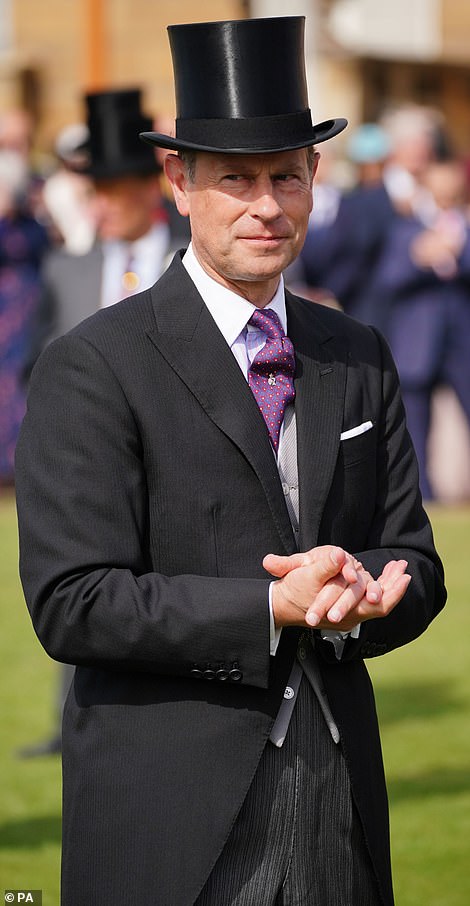 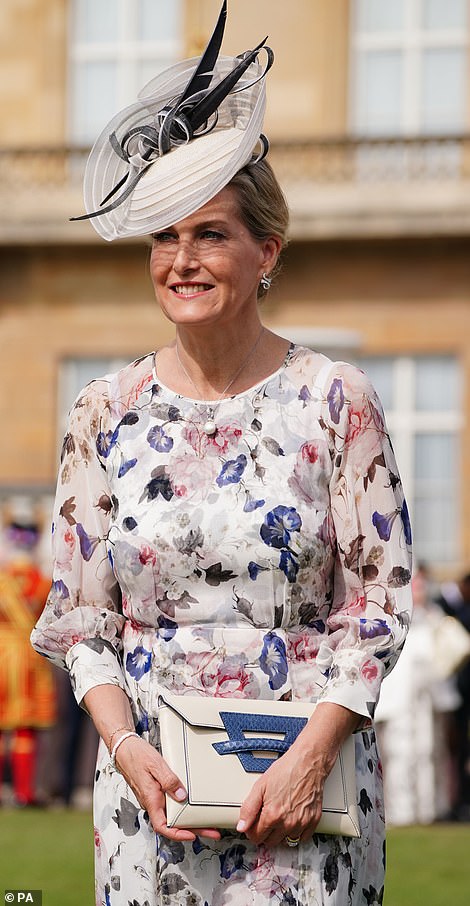 Prince Edward, left, and the Countess of Wessex were on hand to meet hundreds of guests in the Buckingham Palace garden 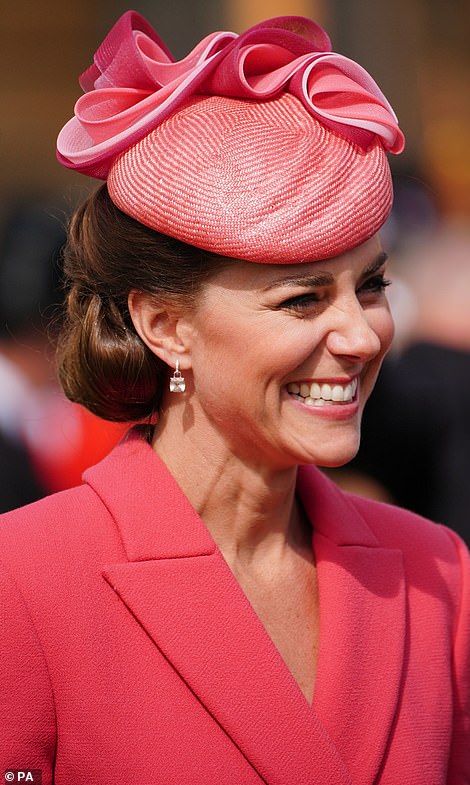 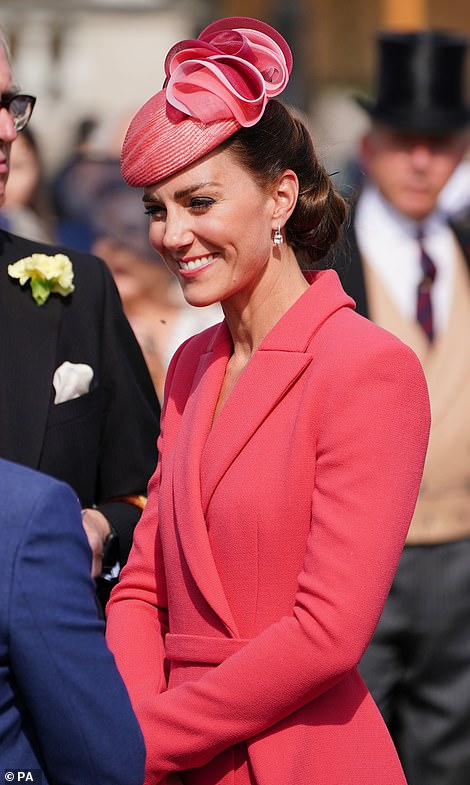 Pink perfection! Displaying her love of color blocking, Kate wore her coral coat dress with a hat in the same shade 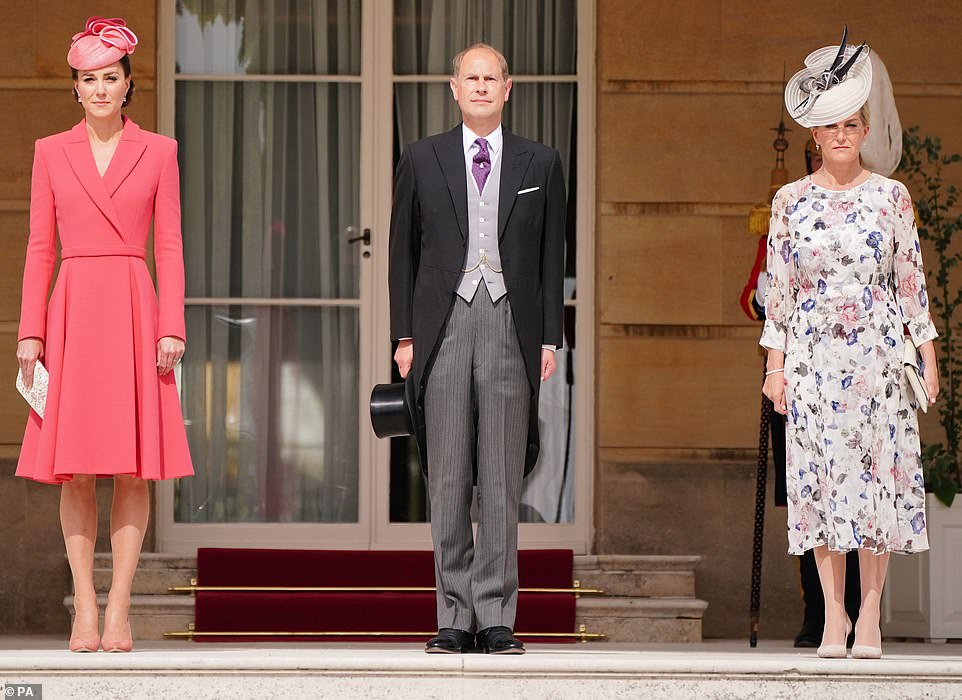 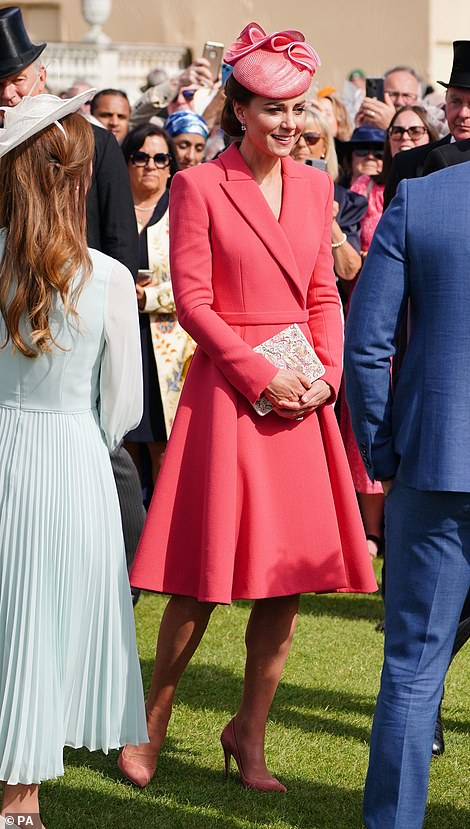 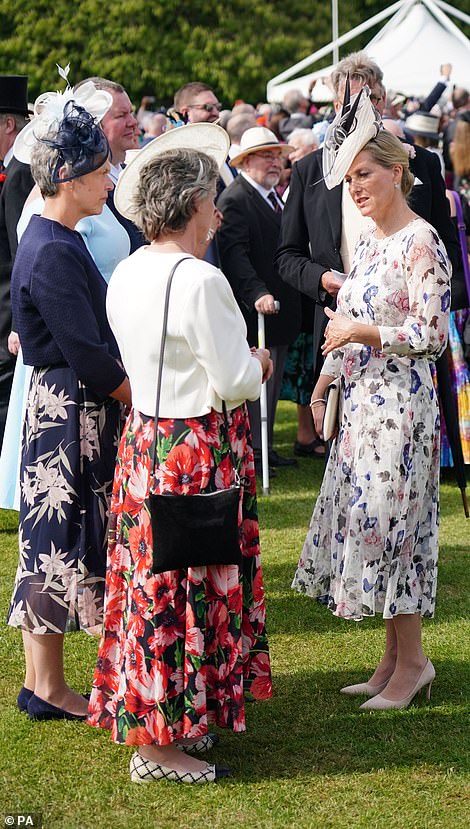 The Duchess of Cambridge, left, and the Countess of Wessex spent time meeting guests on the palace lawn this afternoon 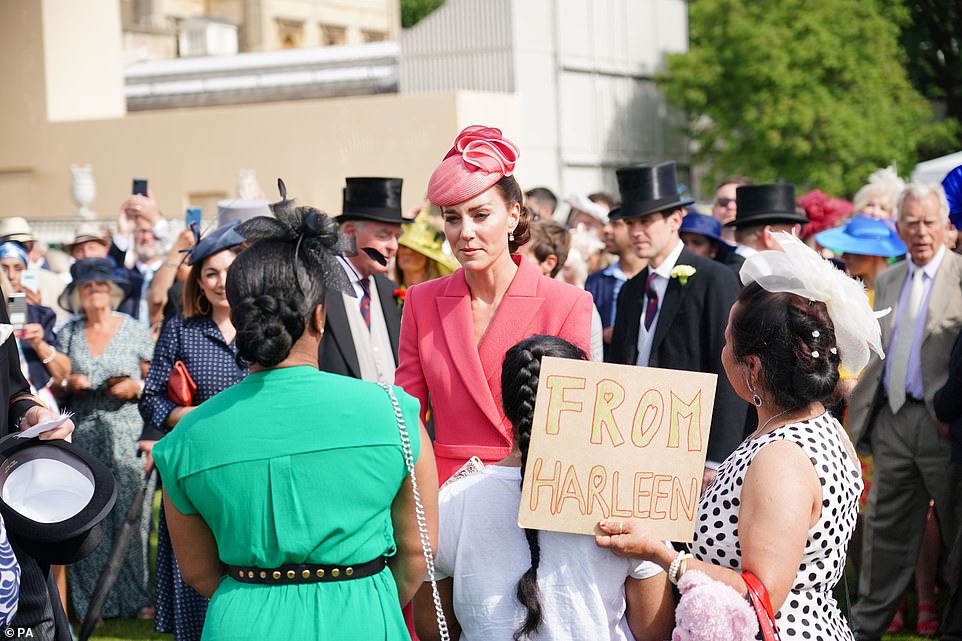 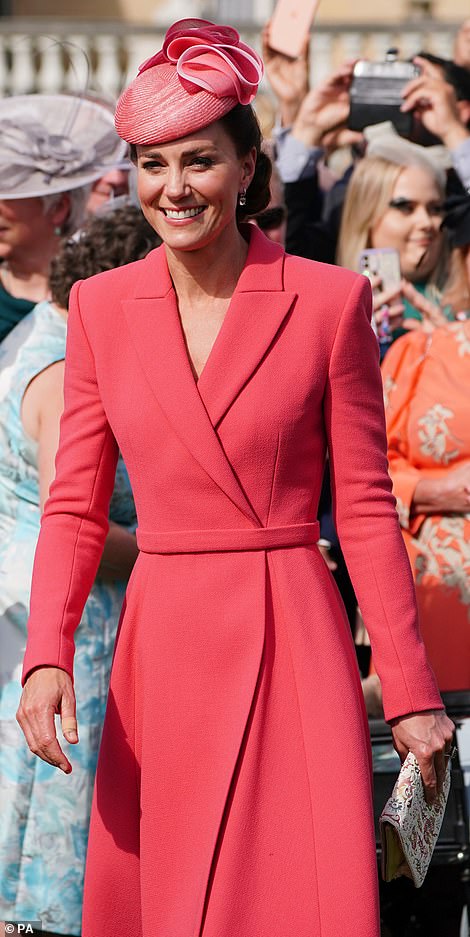 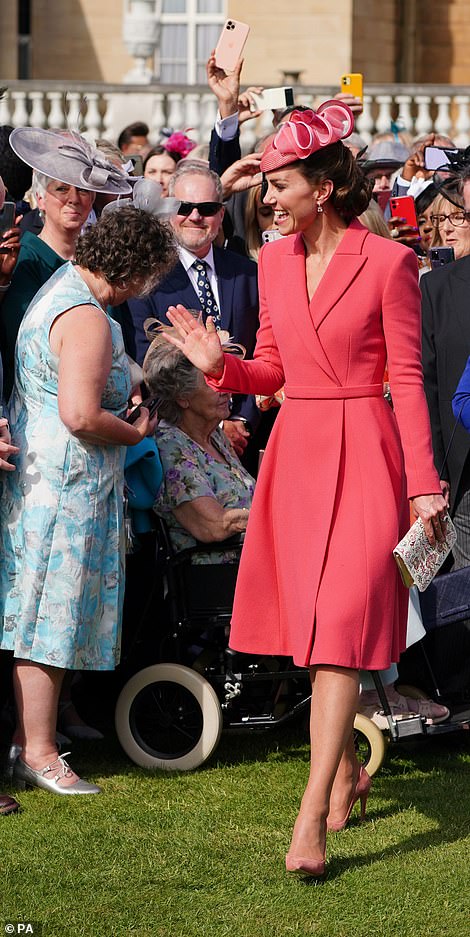 Radiant: Kate beamed as she was introduced to some of the hundreds of guests invited to the Buckingham Palace party 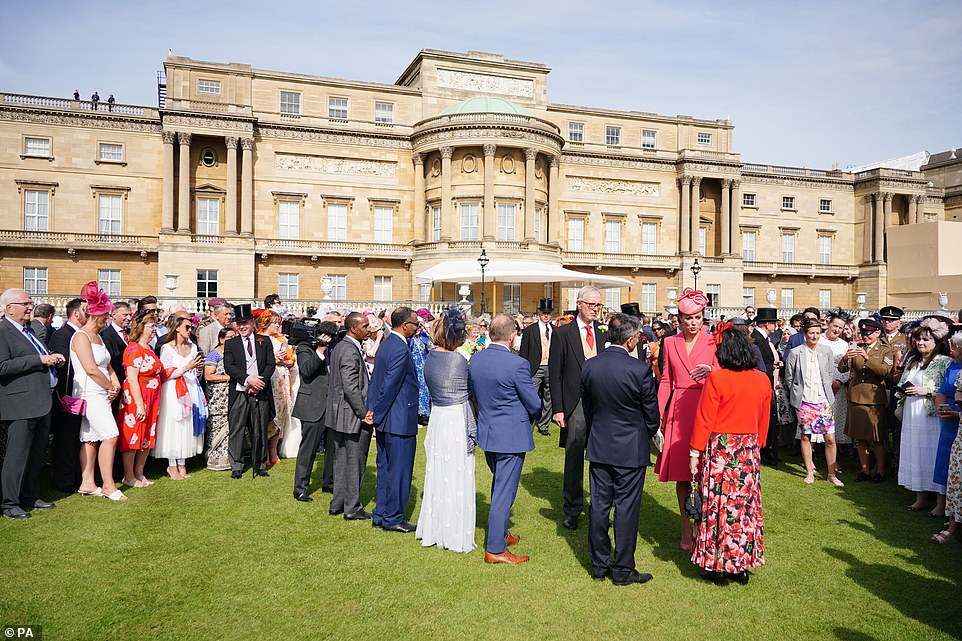 Center of the action: Guests waited patiently for the opportunity to speak to the Duchess of Cambridge at the garden party

The Duchess opted for a coral version of an Emilia Wickstead coat dress she has worn on a number of previous occasions.

The flattering knee-length frock features long sleeves, a sharp collar and band at the waist to accentuate Kate’s slender frame.

Demonstrating her love of color blocking, Kate paired the piece with pink suede point toe pumps and added a hat in a matching shade. She finished the look with a metallic clutch bag that brought a touch of sparkle.

Meanwhile Sophie was typically elegant in a white dress with a pink and purple floral pattern. The Countess of Wessex teamed the midi with a white hat and simple neutral shoes.

It is the first time the garden parties have been held since 2019 after they were canceled due to the Covid-19 pandemic.

Speaking on the Queen’s absence, which was announced last week, royal expert Angela Levin said: ‘It’s a good decision for the Queen not to attend garden parties as there would be too much standing. What a shame though.’ 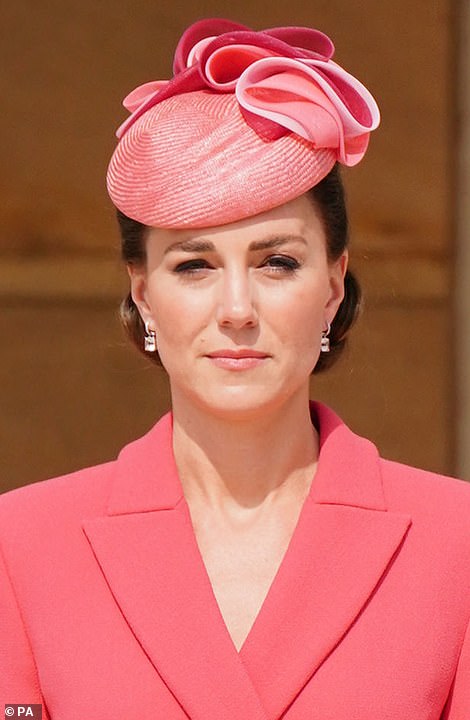 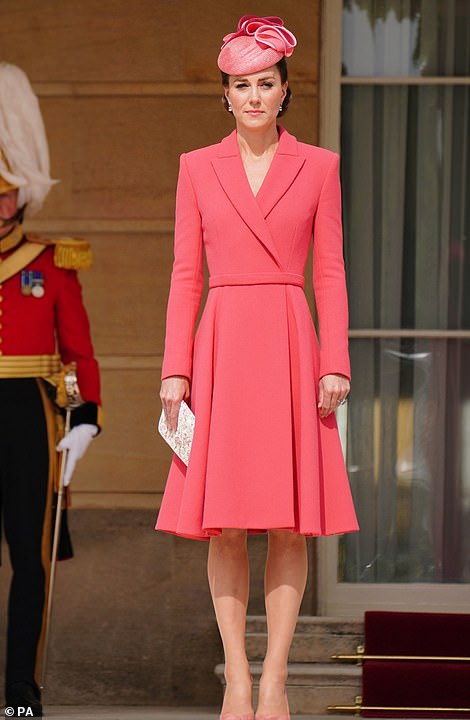 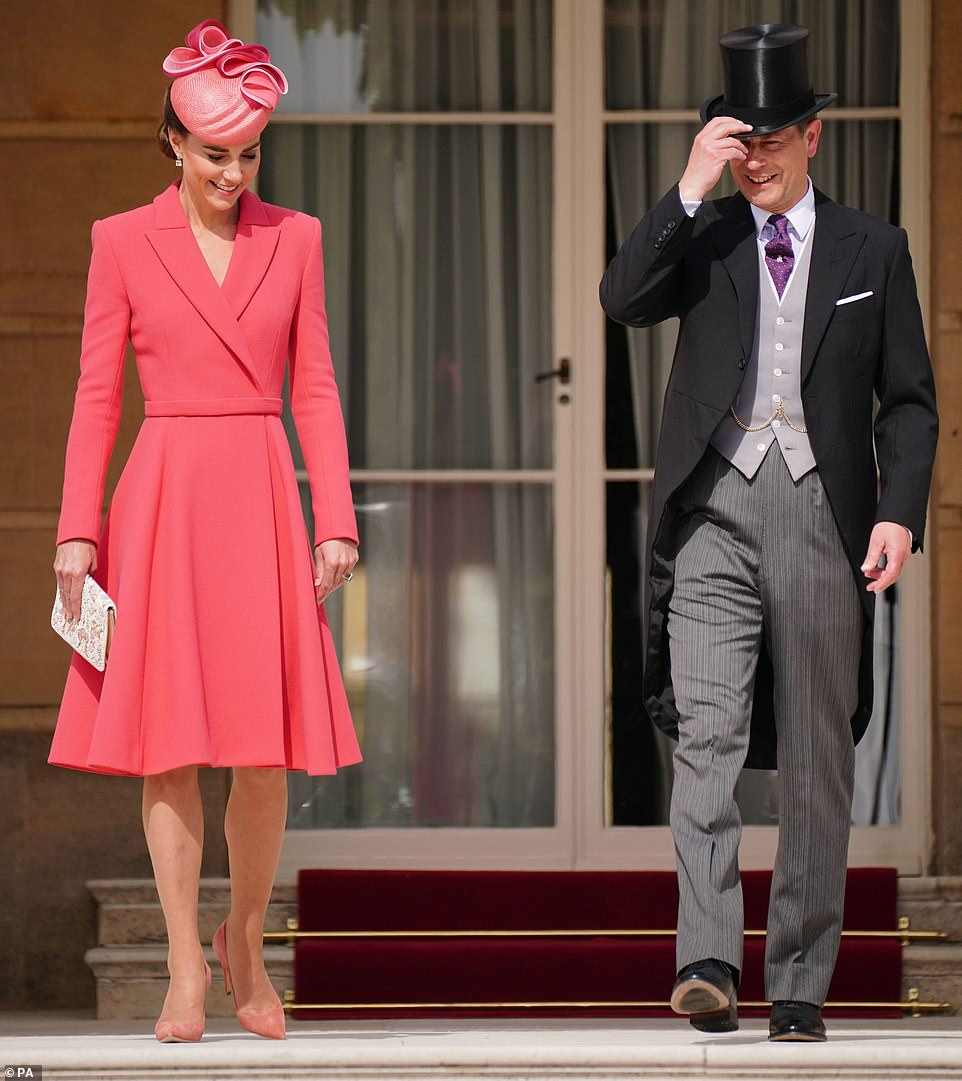 Light-hearted moment: Kate Middleton and Prince Edward shared a joke as they made their way down the steps to the garden 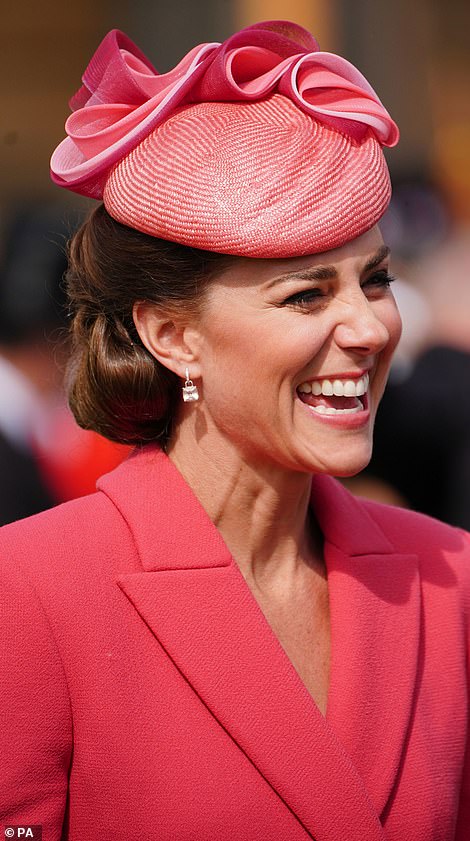 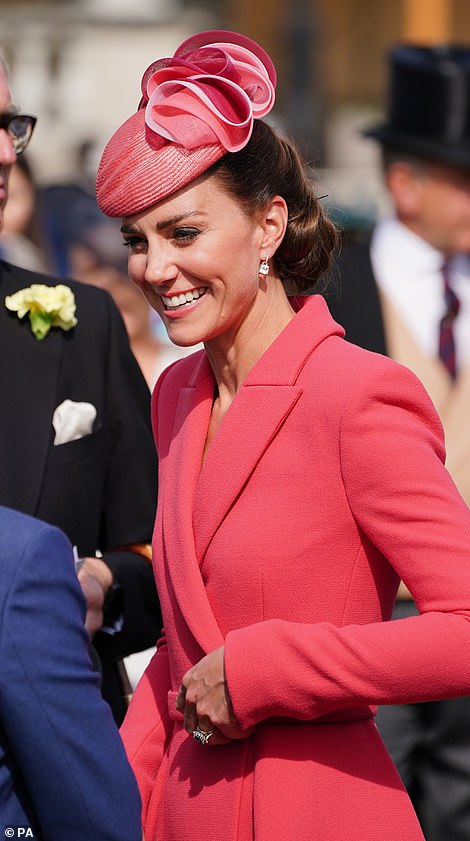 Plenty to smile about! The Duchess of Cambridge looked animated as she spent time speaking to guests in the garden 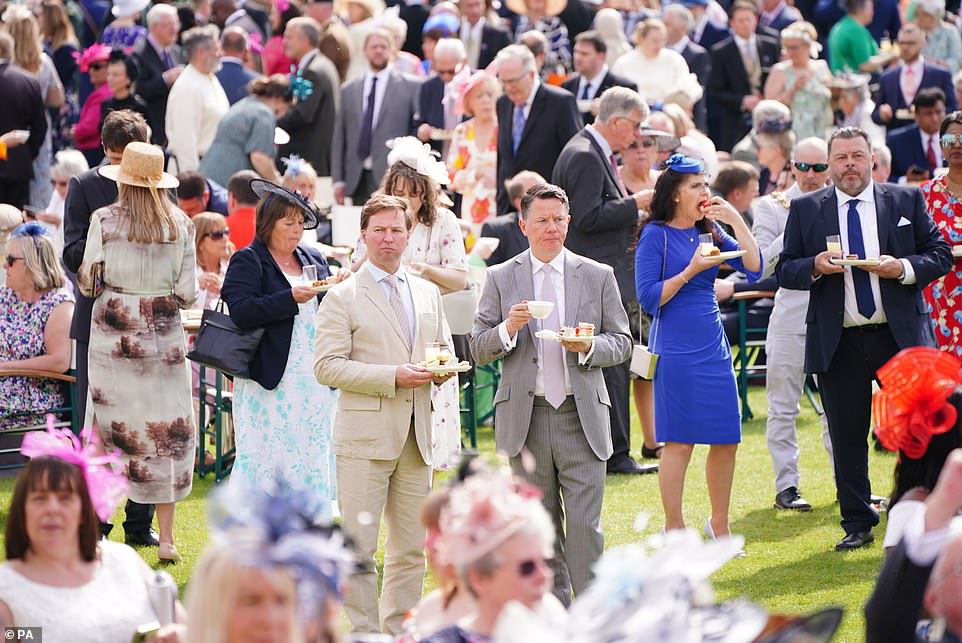 The annual Buckingham Palace garden parties, started in the 1860s by Queen Victoria, are a way of recognizing and rewarding public service and see people from all walks of life enjoy high tea on the lawn to the sounds of a military band.

For the occasion men are asked to wear morning dress or lounge suits while women are invited to wear a ‘day dress, usually with hats or fascinators’. 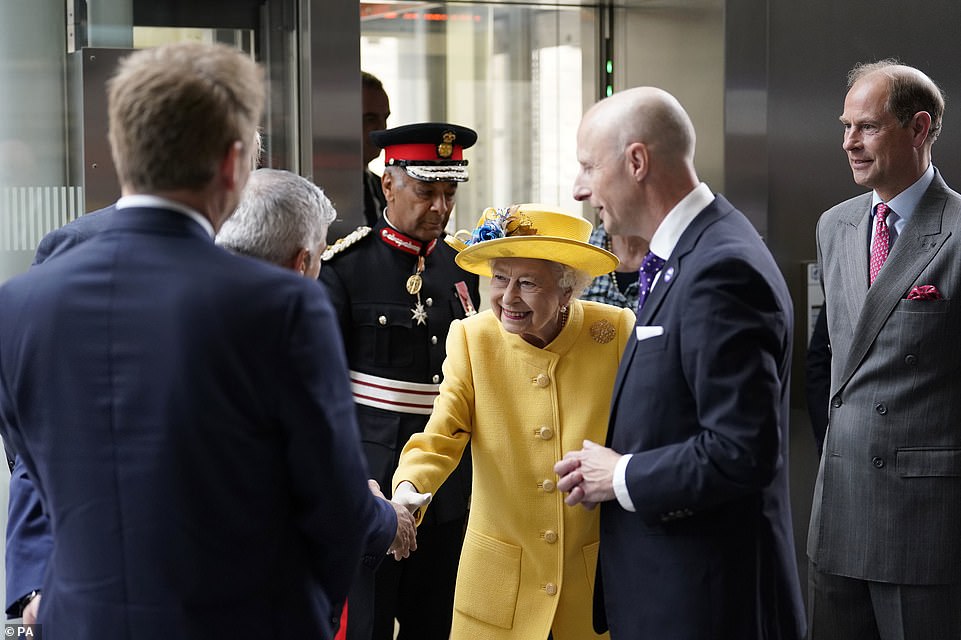 It comes a day after Her Majesty’s surprise appearance at the opening of the Elizabeth Line at Paddington Station, in London, pictured, following her absence from the State Opening of Parliament last week

This year there was also a ‘Not Forgotten Association Annual Garden Party’ which took place on May 12 and was hosted by Princess Anne, who is patron of the charity.

The Not Forgotten Association provides entertainment, leisure and recreation for the serving wounded, injured or sick and for ex-service men and women with disabilities.

The Garden Party for the organisation, which will also be held at Buckingham Palace, will bring together more than 2,000 beneficiaries of all ages and from all services.

Eleni Konalakis, Acting Governor of the State of California, called on Chief Justice of India NV Ramana at the official residence of the Consul General of India in San Francisco…