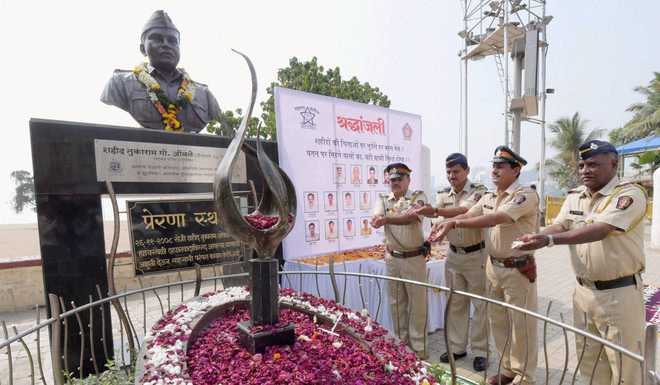 Wreaths were paid on Friday to the martyrs who laid down their lives fighting the terrorists who attacked Mumbai on November 26, 2008.

An official said the martyr’s memorial has been shifted from the original site of the Police Gymkhana at Marine Drive to the police headquarters in Crawford Market, as work on the coastal road project is underway.

Chief Minister Uddhav Thackeray, recovering at a hospital in Mumbai after spinal surgery, also remembered the martyrs of 26/11.

A limited number of people participated in the 13th anniversary of the deadly terror attack in the wake of the COVID pandemic.

The family members of some of the martyr policemen also paid tribute at the memorial.

During the ceremony, the dignitaries met the family members of some of the martyrs.

On 26 November 2008, 10 Lashkar-e-Taiba terrorists from Pakistan arrived by sea and during a 60-hour siege in Mumbai, 166 people, including 18 security personnel, were killed and several others were injured.

Later, nine terrorists were killed by security forces including the country’s elite commando force NSG. Ajmal Kasab was the only terrorist who was caught alive. He was hanged four years later on 21 November 2012. PTI