Mark Sears had 24 points, five rebounds and five assists for the Crimson Tide on Sunday in the third-place game of the Phil Knight Invitational tournament.

Jahvon Quinerly added 21 points off the bench for the Crimson Tide (6-1), who knocked off the top-ranked team for the first time since upsetting Stanford in the 2004 NCAA Tournament.

North Carolina forward Leaky Black, left, defends against Alabama guard Mark Sears (1) during the first half of an NCAA college basketball game in the Phil Knight Invitational on Sunday

‘I was losing track of how many overtimes we were in there at the end,’ Crimson Tide coach Nate Oats said. ‘A lot of credit to our guys. I thought they showed a lot of character when we could have folded.’

Caleb Love led the Tar Heels (5-2) with 34 points, nine rebounds, four assists and three steals. Armando Bacot contributed 20 points and 10 rebounds, and R.J. Davis had 19 points and nine rebounds in the second four-overtime game in North Carolina history. The other was a victory over Tulane in 1976.

‘At the end of the day, Alabama made one more play than we did,’ North Carolina coach Hubert Davis said. ‘I walked in the locker room and a number of the guys had their head down and I told them to pick their head up. I’m just as disappointed (as the players) in terms of the final outcome, but I couldn’t be any more proud about the way they competed.’ 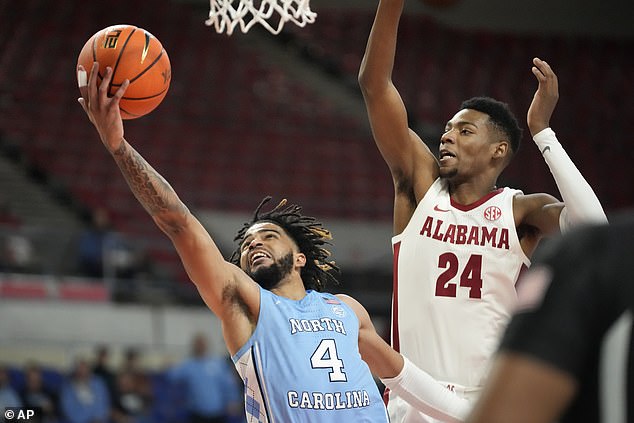 North Carolina guard R.J. Davis (4) goes to the basket as Alabama forward Brandon Miller (24) defends during the first half of an NCAA college basketball game in the Phil Knight Invitational

Bediako gave the Crimson Tide the lead for good on a layup with 26 seconds remaining in the fourth overtime.

The Tar Heels, who lost to Iowa State in the semifinals, led by as much as eight in the second half before Alabama came back to tie it. The Crimson Tide retook the lead on a pair of free throws from Gurley with 2 minutes remaining, and later tied with another free throw from Sears with 51 seconds remaining in regulation.

Alabama starting forward Noah Clowney took a hard fall on a dunk attempt four minutes into the first half and had to be helped off the court. He did not return. 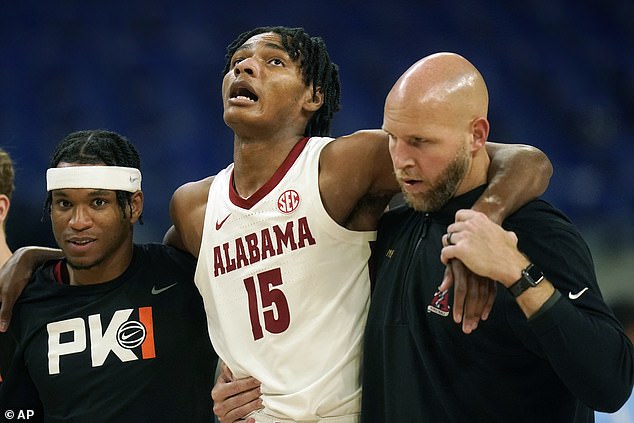 What the papers say – January 29

The NHS, migration and cold change are covered by Sunday’s papers.

1 dead, 5 injured including 2 children in Baltimore shooting: ‘Fighting for their lives’