By Adam Solomons For Mailonline

The footage shared on Telegram channels and by defense expert Rob Lee appears to come from a Russian UAV drone.

Dozens of the weapons were unleashed, trailing smoke as they soared through the air toward seemingly residential targets.

The earth around the launcher then catches fire.

Yet unlike cluster bombs, they are not banned under international law, as long as they’re not used against civilians. 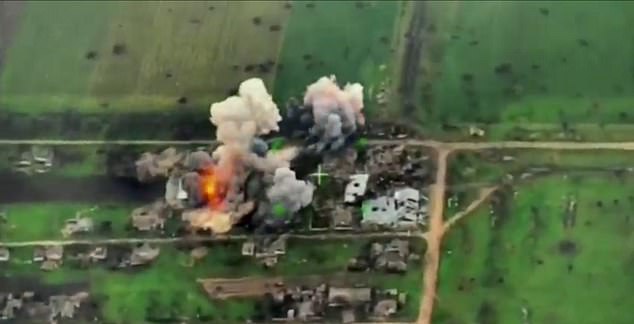 When a thermobaric charge is deployed, the first blast sprays an ultra-flammable fuel vapor 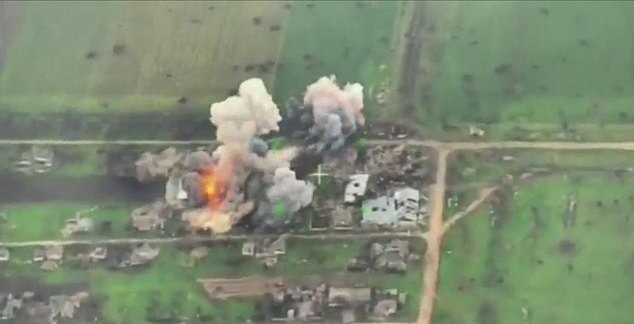 Thermobaric bombs work in two stages. When a charge is deployed, the first blast sprays a fuel vapor throughout the surrounding area.

A second blast then ignites the vapor cloud in the air.

This results in a huge explosion, triggering a high-temperature fireball which sucks up the oxygen in the surrounding area and creates a massive blast wave.

The fireball can melt through defenses and vaporize bodies caught close to the explosion, while the high-pressure blast wave can demolish buildings and rupture human organs.

The footage appeared as Putin’s role in the invasion of Ukraine was likened to that of a brigadier or general by Western military sources.

They also said General Valery Gerasimov is micro-managing the war in minute detail which would normally be overseen by a colonel.

The source added that Russian battalion tactical group had been ‘battered’, stating: ‘If Putin is doing the job of a brigade commander’ then ‘he could be delving into a force that could be as small as 700 to 1,000 soldiers’.

Putin’s soldiers have so far failed to achieve their military objectives in eastern Ukraine, where Russian forces have been attempting to mount a breakthrough in order to encircle Ukrainian troops in the Donbas region.

Officials believe Putin’s decision to take personal control of on-the-ground troop movements could be contributing to the military failures.