Lori Long and Mark Contreras met on Match.com in November 2015. For Long, their first date a few weeks later, at Tarpy’s Roadhouse, a restaurant in Monterey, California, was a high-stakes proposition.

“Within our first few emails we were really clicking,” she said. Telling him about the spinal disease that causes her to pitch forward and walk with a cane before he had a chance to meet her, she thought, might have been off-putting. But she didn’t want to seem like she was hiding something. So, Long, 50, settled on a predate disclosure.

Contreras, 51, wouldn’t have minded if she hadn’t told him beforehand. Their email connection had felt special to him, too. When he asked her to dinner, skipping over the customary casual coffee date, it was because he was already attracted to her personality as much as her picture. “I told her, ‘I think we’ll be fine,’” he said. “And we were.”

Long would nearly break his heart two years later. Within weeks of the Tarpy’s date, both knew they had found their forever partner. But three months after Contreras proposed in his Salinas, California, home in December 2016 and Long said an ecstatic “yes,” Long sat him down for a talk. “I told him, ‘Mark, we’re not going to be able to pursue a life together,’” she said.

She still wanted to marry him, but not if it meant giving up the health care benefits that she relies on to live.

Long is caught in a governmental quagmire. She was diagnosed at 15 with ankylosing spondylitis, a condition that causes bone fractures and sometimes requires her to use a wheelchair. As a teenager, she said, she watched her family experience financial difficulties attempting to pay for her health care when she first got sick, even though she had private insurance at the time.

Because she qualifies for Social Security benefits through a program for adults whose medical disability started before age 22, she is considered a “disabled adult child.” The designation, known as DAC, applies to 1.1 million Americans, according to the Social Security Administration website.

Those who qualify generally cannot continue to receive benefits if they marry someone who is not disabled or retired. (For a brief window after same-sex marriage became federal law in 2015, marrying a person of the same gender was also a workaround to avoid losing benefits; it took a while for the Social Security Administration to change the wording of its policies from “husband and wife” to “spouse.”)

The marriage provisions, Long maintained, are lodged in outdated ideas that have marginalized the disabled. “When they wrote the Social Security laws, they weren’t thinking that young people with disabilities would ever be marriage material,” she said. “People didn’t think we might have dreams and hopes like everybody else. We do.”

Long and Contreras, an accountant for Sun Street Centers, a nonprofit organization in Salinas that provides education to prevent alcohol and drug addiction, are still engaged. But a marriage factoring in the loss of Long’s benefits is financially untenable for them. Adding her to his health insurance would be prohibitively expensive, plus it wouldn’t provide the same type of coverage as Medicaid.

Besides her $1,224 monthly DAC stipend, Long’s only source of income is a part-time sales job at a Sand City, California, Home Goods store. There, she makes an hourly wage in the teens (the company has a policy against disclosing wages).

But Long and Contreras’ pull to be recognized legally as spouses hasn’t waned. When Long told him about the marriage penalty after finding out about it in March 2017, he responded in a way she called “just about perfect.”

Lori Long and her fiance Mark Contreras, for whom getting married would mean losing the Medicaid benefit Calif (Clara Mokri/The New York Times)

“He said, ‘Lori, we’re going to figure this out,’” she said. “He said, ‘I loved you yesterday, I love you today and I’ll love you tomorrow.’” They have been at the figuring-out part ever since.

And they are not alone. Long is among a nationwide network of people pushing for change in Social Security laws as they pertain to marriage. They include not just DAC recipients like her, but also a larger group of disabled Americans — roughly 4 million — who get SSI, or Supplemental Security Income.

In September 2019, Long contacted Rep. Jimmy Panetta, a Democrat in California’s 20th Congressional District. Earlier this year, he introduced the Marriage Equality for Disabled Adults Act, which includes a provision nicknamed “Lori’s Law” that would remove the DAC marriage restriction.

“The resolution would not change the federal law,” said Ayesha Elaine Lewis, a staff attorney with the Disability Rights Education and Defense Fund. “It’s just California saying, ‘Congress, we support Lori’s Law and we want you to pass it.’”

Change at the state and federal level is “a real possibility,” Lewis said, but “it will be a long and challenging journey.”

Gabriella Garbero of St. Louis, for one, feels robbed of her right to marry every day.

Garbero, 31, was born with spinal muscular atrophy type two, a rare muscle-wasting disease. She has used a wheelchair since early childhood. “Basically, when my brain tells my muscles to move, my muscles can’t hear,” she said. Garbero gets a monthly Social Security Disability Insurance check for $1,150.

But it is not just the prospect of losing that money if she marries her non-disabled fiance, Juan Johnson, 28, that’s keeping her from setting a wedding date. Garbero qualifies for SSI as well as SSDI; she needs the SSI designation to maintain her health care. “SSI is the gateway for me to qualify for Medicaid,” she said. “Medicaid is what keeps me alive.”

Garbero is a 2021 graduate of St. Louis University Law School. She plans to take the Missouri bar exam in 2023 and is writing a book about systemic oppression based on disability. When she and Johnson got engaged Jan. 1, 2021, she ran some numbers. She determined that if she were to forfeit Medicaid for marriage, the cost of home health aides who care for her when Johnson, who works in information technology, can’t be there to help her get around and take care of basic needs, would cost $100,000 to $200,000 annually.

While she would qualify for his health insurance as a spouse, Garbero said, “it would be woefully inadequate in meeting my health needs.” 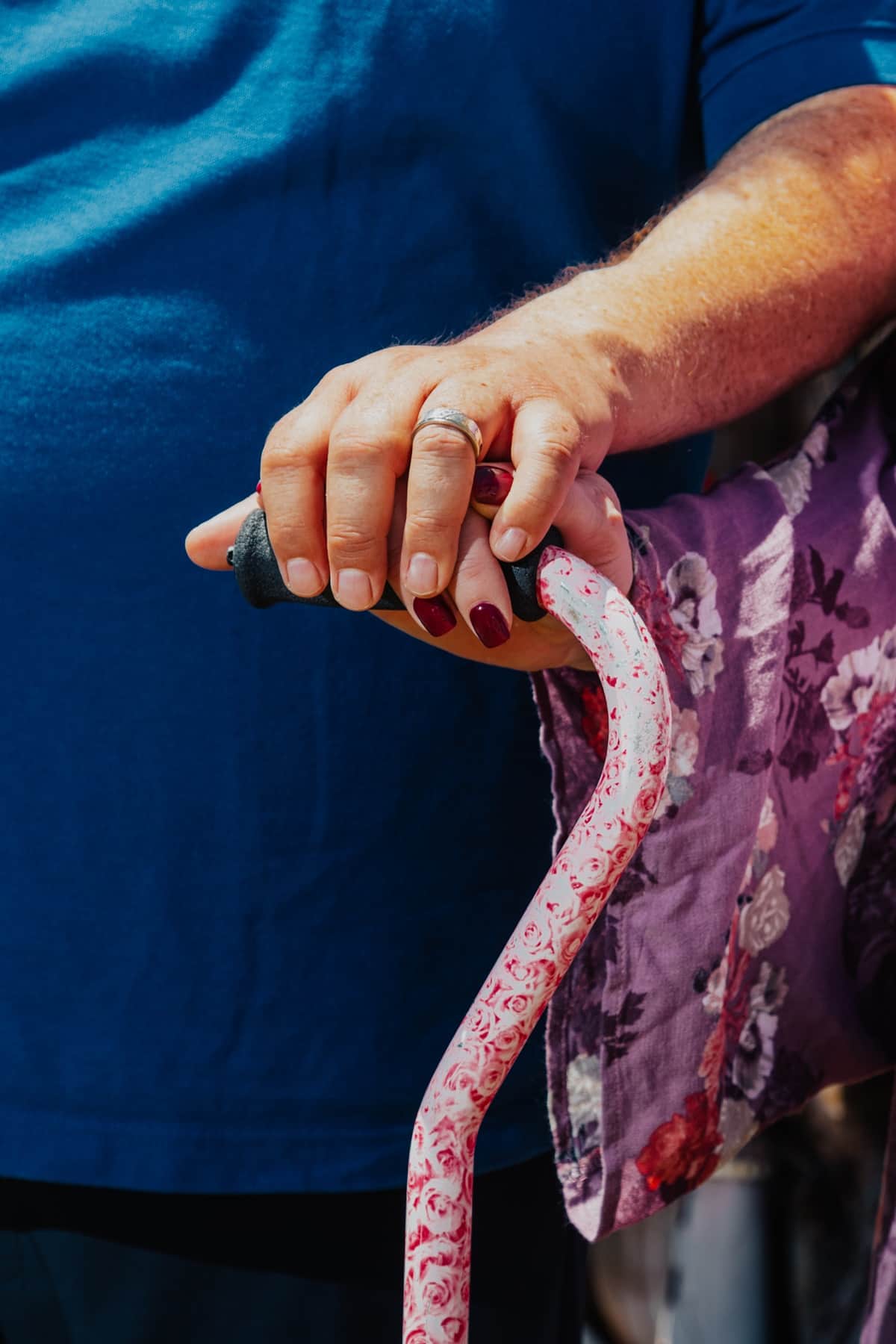 When they wrote the Social Security laws, they werenÕt thinking that young people with disabilities would ever be marriage material,Ó Long said (Clara Mokri/The New York Times)

“So unless one of us wins the lottery or starts making half a million dollars a year, there won’t be a wedding,” she added. “Marriage is a cultural club you’re not really allowed into if you’re disabled.”

Pockets of hope have been surfacing.

On Feb. 12, interabled couple Kaitlin A. Kerr and Jonathan Heidenreich were married in a self-uniting ceremony at a coffee shop, the Coffee Tree Roasters, in Pittsburgh, where they live. Kerr, an SSDI recipient who gets Medicaid and Medicare, found a way to keep the benefits that help her cope with Ehlers-Danlos syndrome, a rare disease that affects the connective tissue and forced her to leave her job as a registered nurse in 2017.

In January, the Pennsylvania Legislature enacted a bill passed in 2021 that widens eligibility for a state program called Medical Assistance for Workers with Disabilities. The changes allow Kerr, 35, who now works 10 hours a week from home as a nurse educator, to keep Medicaid as a married woman. Before the new law, qualifying for Medicaid through the state program would have been impossible because of income thresholds that placed her and Heidenreich above the poverty line.

Heidenreich, 31, is a high school English teacher who left his job during the pandemic to stay home with Kerr; he now works in mortgage lending. He proposed after one year of dating in 2019.

Heidenreich thinks of his wife and the others who helped persuade the state to change its program as heroes. “They made sacrifices and advocated so fiercely and pushed themselves even with limited physical capabilities,” he said.

Kerr intends to keep pushing. “Trapping us in enforced poverty and preventing us from forming families sends a message to people with disabilities that we’re not worth the connections other people have,” she said. “The next step is getting the federal laws changed. We’re going to do this piece by piece, so nobody gets left behind.”

This article originally appeared in The New York Times.