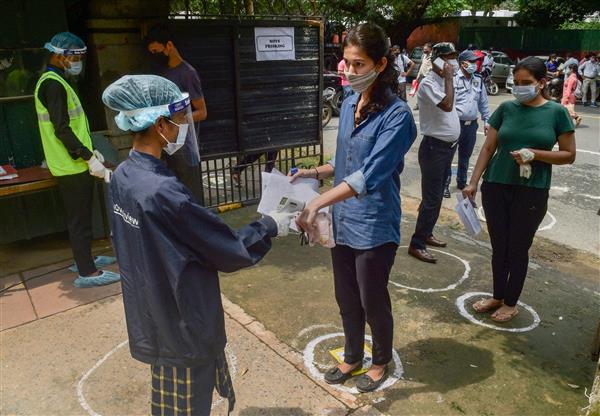 The Center on Thursday told the Supreme Court that it has decided to reconsider the annual income ceiling of Rs 8 lakh prescribed for the purpose of determining the Economically Weaker Section (EWS) category for reservation in NEET admissions for postgraduate medical courses. have taken.

A bench of Justices DY Chandrachud, Surya Kant and Vikram Nath was informed by Solicitor General Tushar Mehta that a committee would be constituted to determine the criteria for EWS and it would take four weeks.

Mehta said that the NEET (PG) counseling will be postponed by another four weeks as per the assurance given to the court earlier.

Justice Kant observed that EWS quota is a very efficient and progressive type of reservation and all states should support the Center in its endeavor.

The bench said the only question is whether the classification should be done in a scientific manner and it appreciates that the Center has decided to revisit the criteria laid down earlier.

Senior advocate Arvind Datar, appearing for the petitioners (students), submitted that since a lot of time has passed and the Center should push back the implementation of EWS quota for the next academic year and the counseling of the current year should be allowed to continue .

The bench agreed with Datar’s contention and asked Mehta whether it can proceed with the implementation of the constitutional amendment to the next academic year and allow the consultations to continue for the current academic year.

Mehta said that the government has decided to implement the 103rd Constitutional Amendment from the current academic year and it would not be appropriate to push it back.

He said that if the decision is taken before four weeks, then he will inform the court about it.

The bench told Datar that four weeks was not unreasonable and it did not want to pressurize the government to do it earlier, otherwise the norms would be unscientific and set randomly.

Advocate Shashank Ratnu, appearing for some OBC candidates, requested that the application for reservation to OBC students should not be postponed as the Center is planning to re-consider the EWS criteria.

The bench said that it has not said anything about the OBC students and is not disposing of the petition.

It then recorded Mehta’s arguments and posted the matter for further hearing on January 6.

The top court on October 21 asked the Center whether it would like to reconsider the Rs eight lakh annual income limit prescribed for determining the EWS category for reservation in NEET PG admissions.

The top court had clarified that it was not coming under the purview of the policy but was only trying to ascertain whether constitutional principles were followed.

It was upset over no affidavits were filed by the Ministry of Social Justice and Empowerment and the Department of Personnel and Training (DoPT) and questions were framed by the Center to be answered in a week.

It had asked the Center whether any exercise had been done before fixing the annual income cap of Rs 8 lakh for determining the EWS category and whether the 2010 Major General (Retd) SR Singho Commission report before ascertaining the criteria. was considered?

Major General SR Singho (Retd) Commission was constituted by the UPA government in 2010 and has recommended welfare measures for the EWS category, including reservation for them.

The Center had said that the commission’s report was one of the basis for setting the criteria but after that several deliberations took place and other factors were also taken into account.

It had asked the Center to respond to a question that since the income limit for determining the creamy layer in OBC category and EWS is same at Rs 8 lakh, would it be arbitrary to provide the same income limit for EWS and OBC.

The bench said that as per the clarification in the 103rd Constitutional Amendment that the norms for EWS will be notified by the state governments, then how can the Center notify uniform EWS norms for the whole country.

The apex court had on October 7 sought exploratory questions from the Center on its decision to fix an annual income ceiling of Rs 8 lakh for determining the EWS category for reservation in NEET admissions.

The Center had then said that fixing an annual income limit of Rs 8 lakh for the EWS category is a matter of policy based on the National Cost of Living Index.