Taliban fighters chanted victory slogans next to the US embassy in Kabul Monday as they marked the first anniversary of their return to power in Afghanistan following a turbulent year that saw women’s rights crushed and a humanitarian crisis worsen.

Exactly a year ago, the hardline Islamists captured Kabul after a nationwide lightning offensive against government forces just as US-led troops were ending two decades of intervention in a conflict that cost tens of thousands of lives.

‘We fulfilled the obligation of jihad and liberated our country,’ said Niamatullah Hekmat, a fighter who entered the capital on August 15 last year just hours after then-president Ashraf Ghani fled the country.

‘It’s the day of victory and happiness for the Afghan Muslims and people. It is the day of conquest and victory of the white flag,’ government spokesman Bilal Karimi said on Twitter.

Taliban fighters flying the group’s white and black flag and carrying American-made rifles parade outside the shuttered US embassy in Kabul on Monday, marking a year since they re-took control of the country 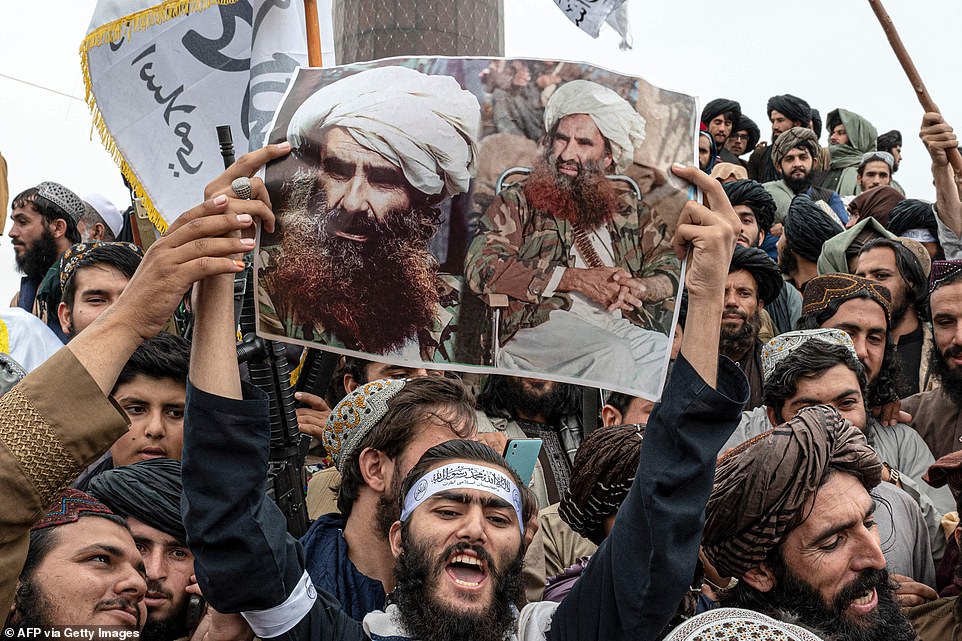 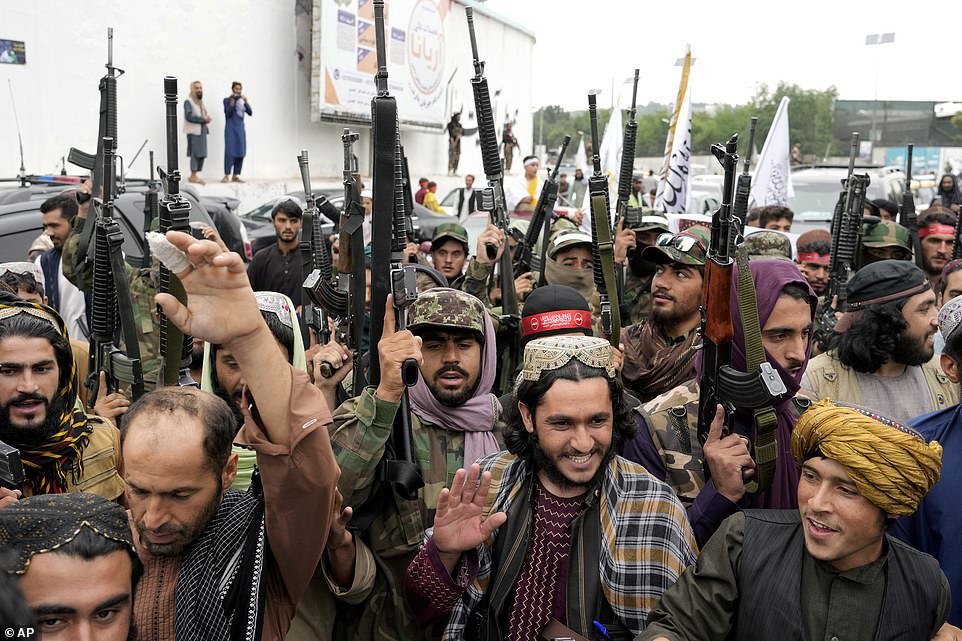 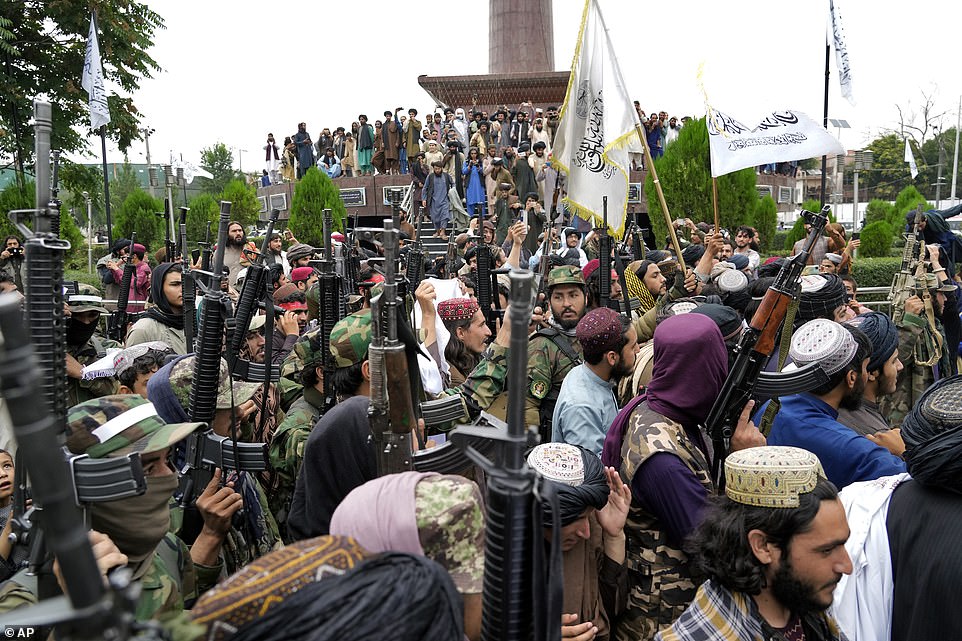 Taliban fighters flying flags and brandishing rifles parade through the streets of Kabul, one year to the day since they stormed into the capital and forced President Ashraf Ghani to flee 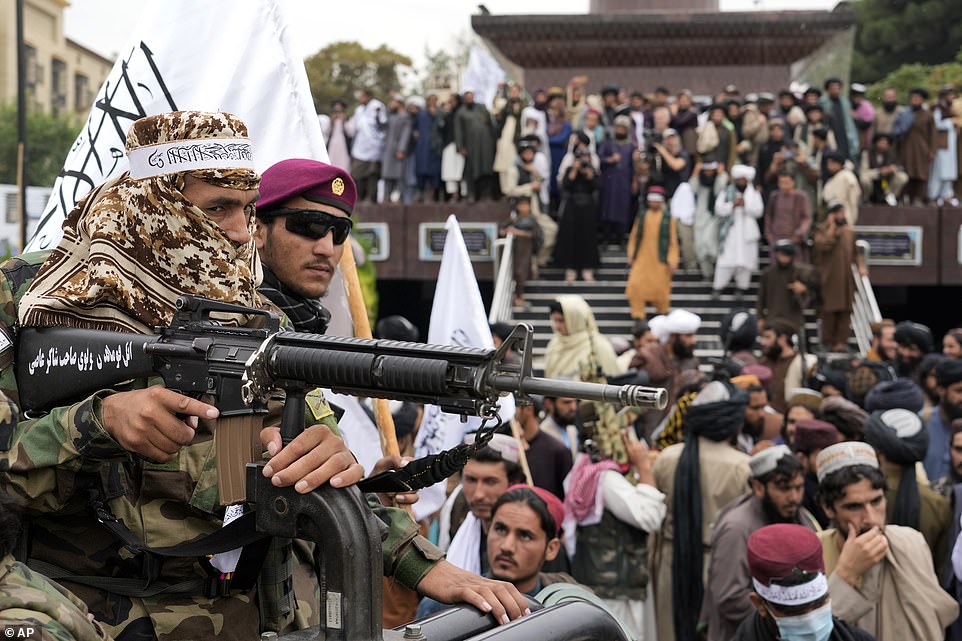 A Taliban fighter with an American rifle takes part in ‘victory’ day celebrations in the capital Kabul, as Islamist leaders declare a day of national holiday to mark the occasion 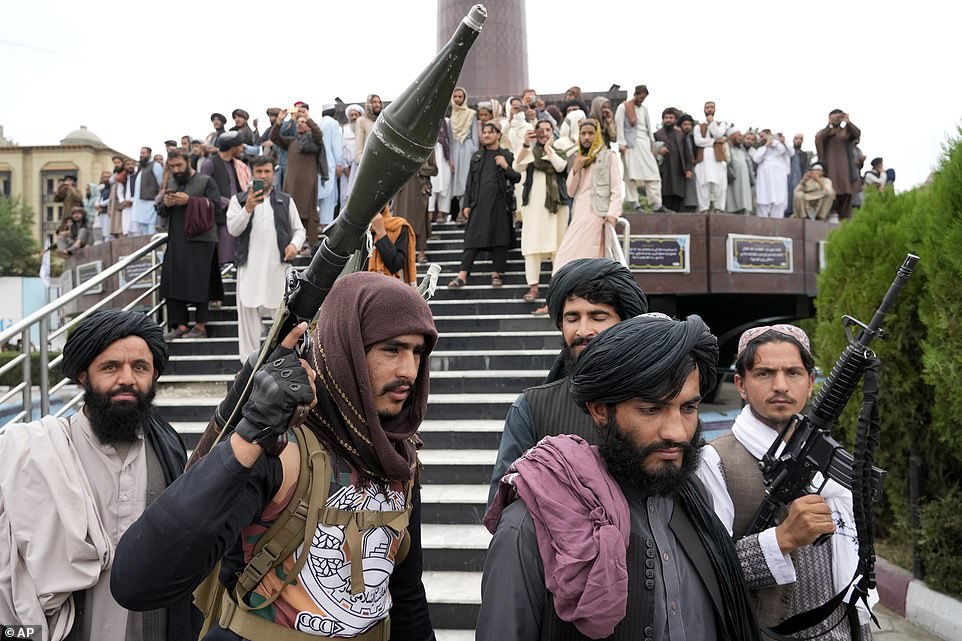 A Taliban militant carrying an RPG launcher over his shoulder takes part in a parade in the capital Kabul, outside the abandoned American embassy 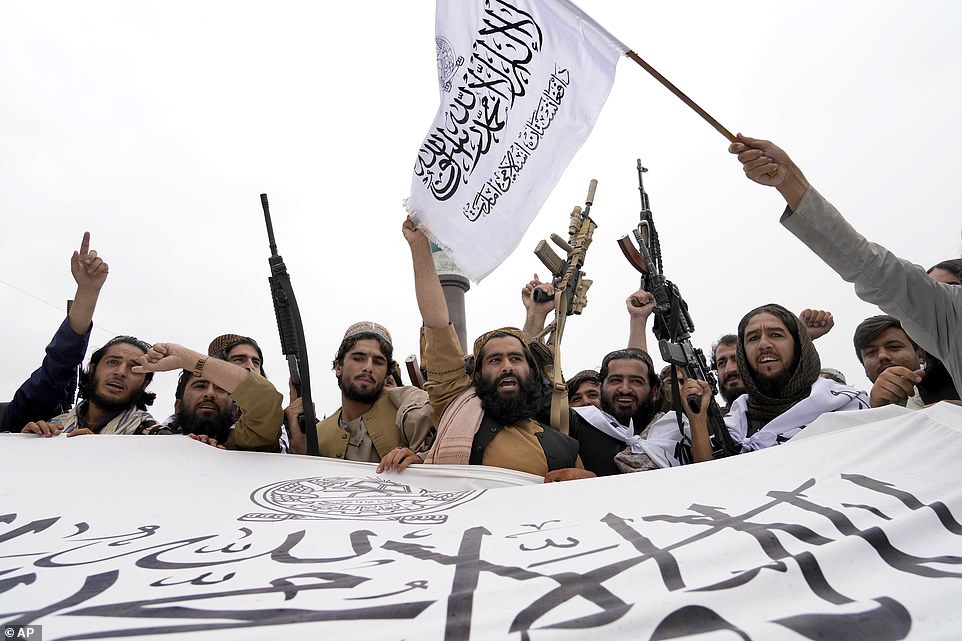 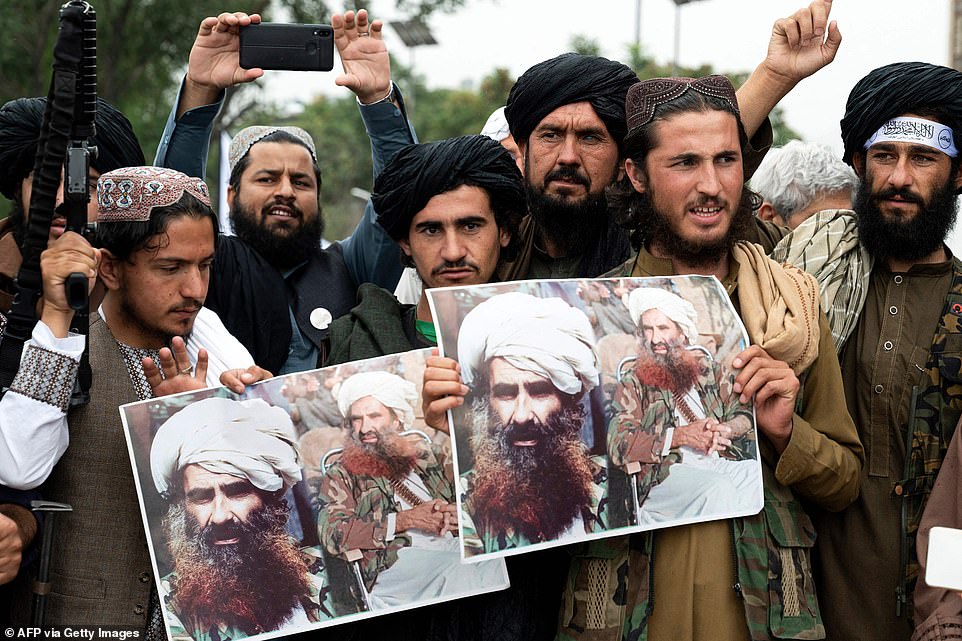 Taliban fighters carry pictures of Jalaluddin Haqqani, founder of the terrorist Haqqani Network which is linked to Al Qaeda, as they celebrate victory over US-led forces in Afghanistan 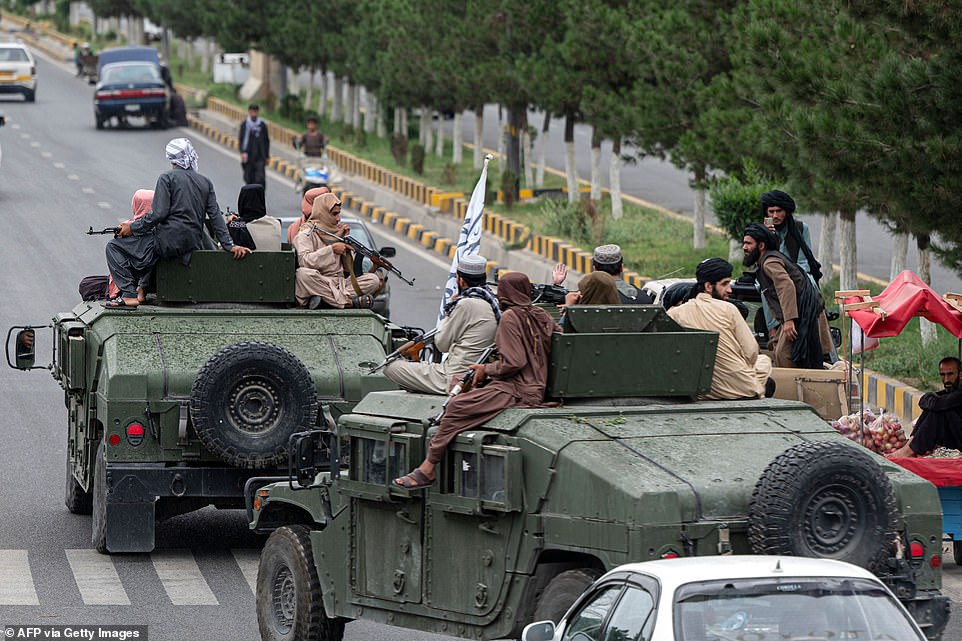 Taliban fighters ride atop American Humvee vehicles captured as they re-took control of the country, entering the capital Kabul exactly a year ago today

The chaotic withdrawal of foreign forces continued until August 31, with tens of thousands of people rushing to Kabul’s airport hoping to be evacuated on any flight out of Afghanistan.

Images of crowds storming the airport, climbing atop aircraft – and some clinging to a departing US military cargo plane as it rolled down the runway – aired on news bulletins around the world.

Authorities have so far not announced any official celebration to mark the anniversary, but state television said it would air special programmes.

Many Taliban fighters gathered in Kabul’s Massoud Square, adjacent to the now-shut US embassy, where they displayed the regime’s white banners.

‘Long live the Islamic Emirate… long live independence,’ they chanted, some holding weapons while others took pictures on their mobile phones.

Taliban flags fluttered from lamposts along the road to the airport.

Taliban fighters expressed happiness that their movement was now in power – even as aid agencies say that half the country’s 38 million people face extreme poverty.

‘The time when we entered Kabul, and when the Americans left, those were moments of joy,’ said Hekmat, now a member of the special forces guarding the presidential palace.

For many ordinary Afghans, however, the return of the Taliban has only increased hardships – especially for women. 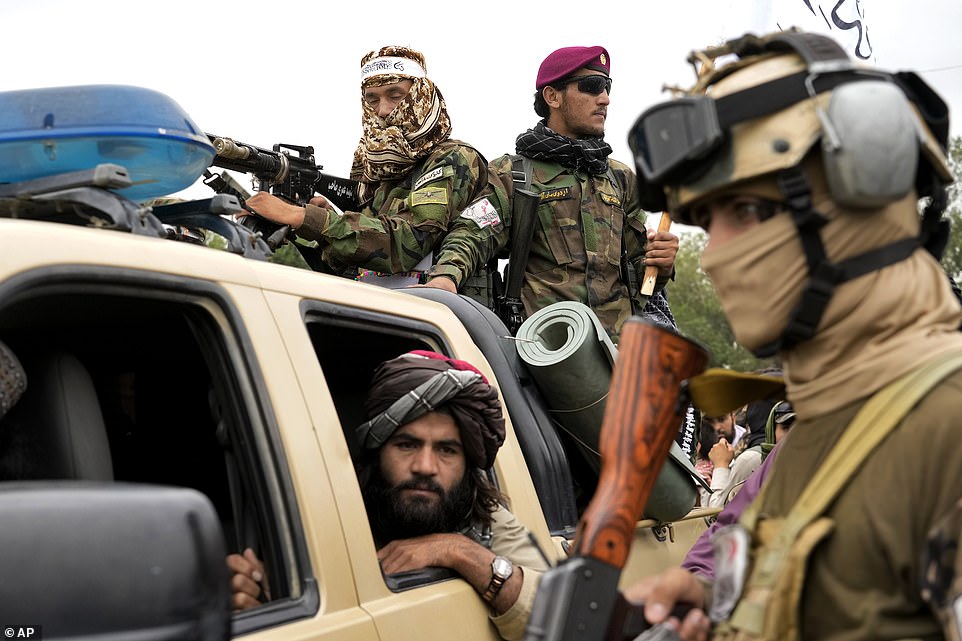 Taliban fighters celebrate one year since they seized the Afghan capital, Kabul, in front of the U.S. Embassy in Kabul 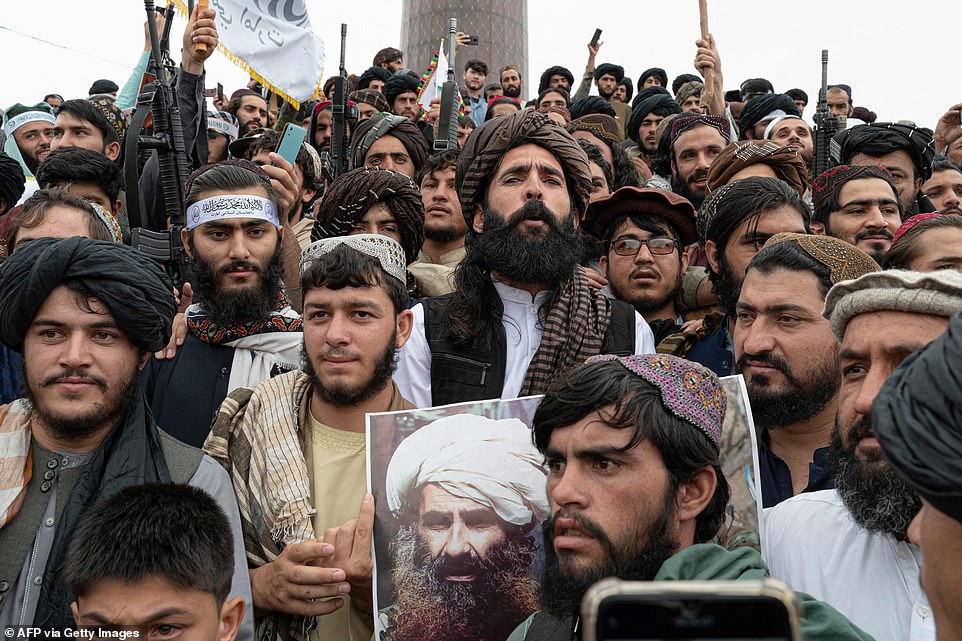 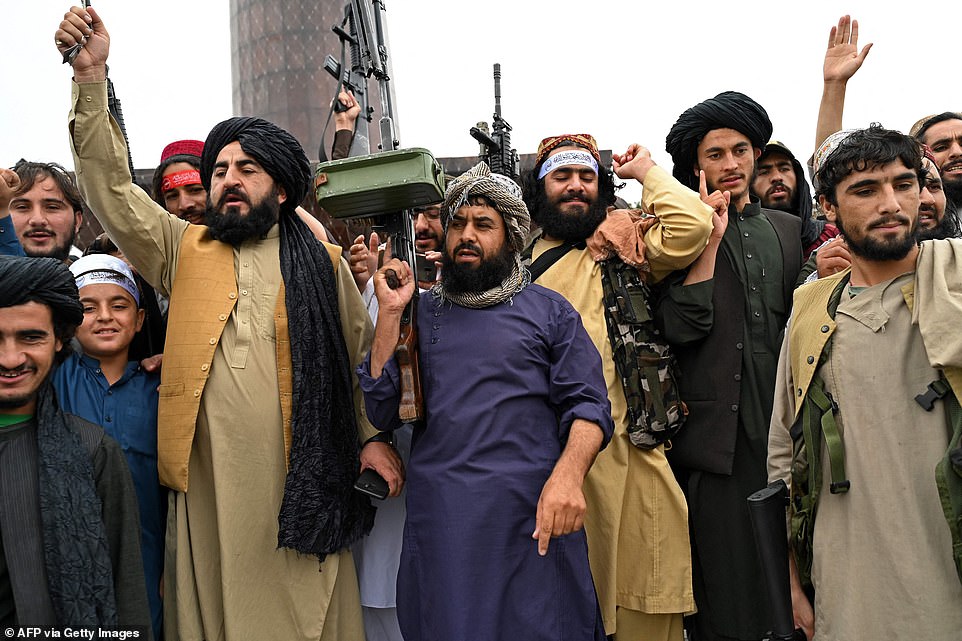 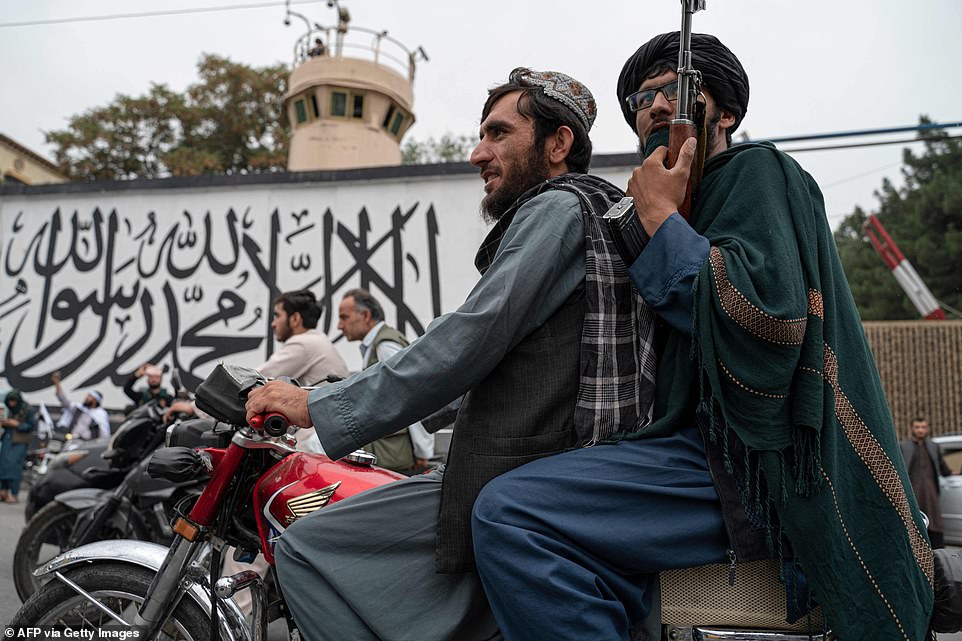 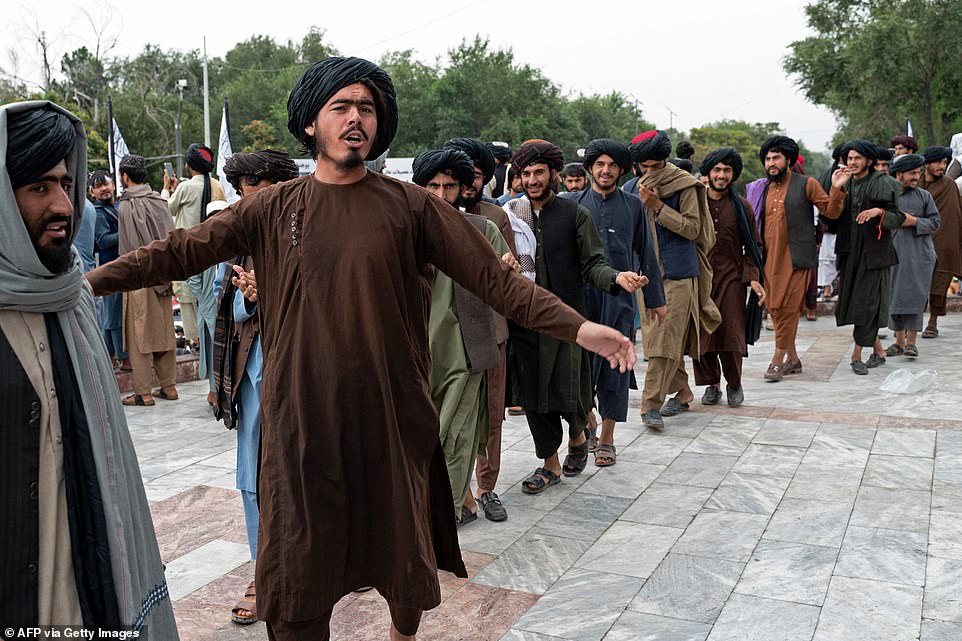 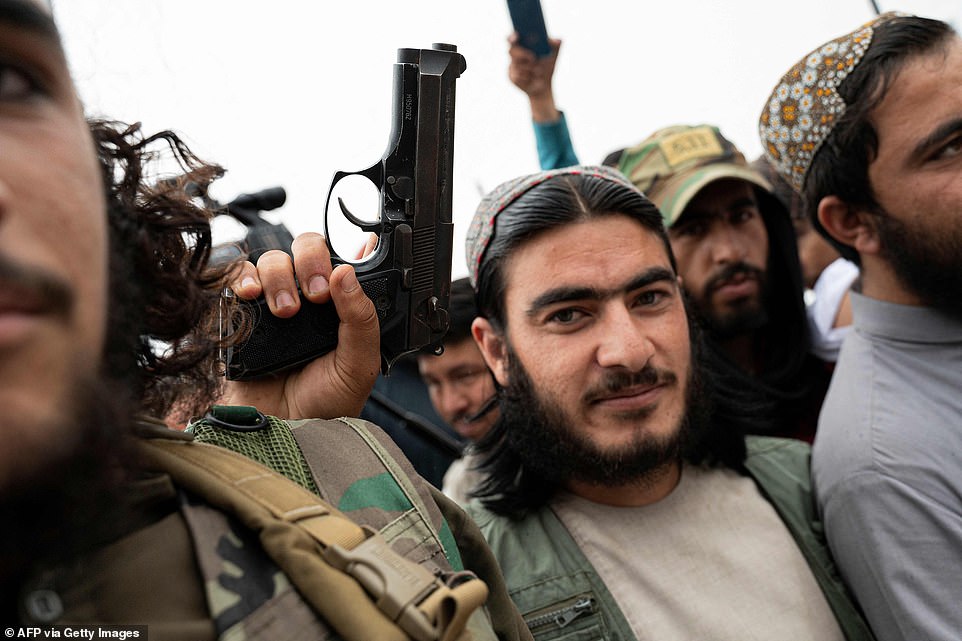 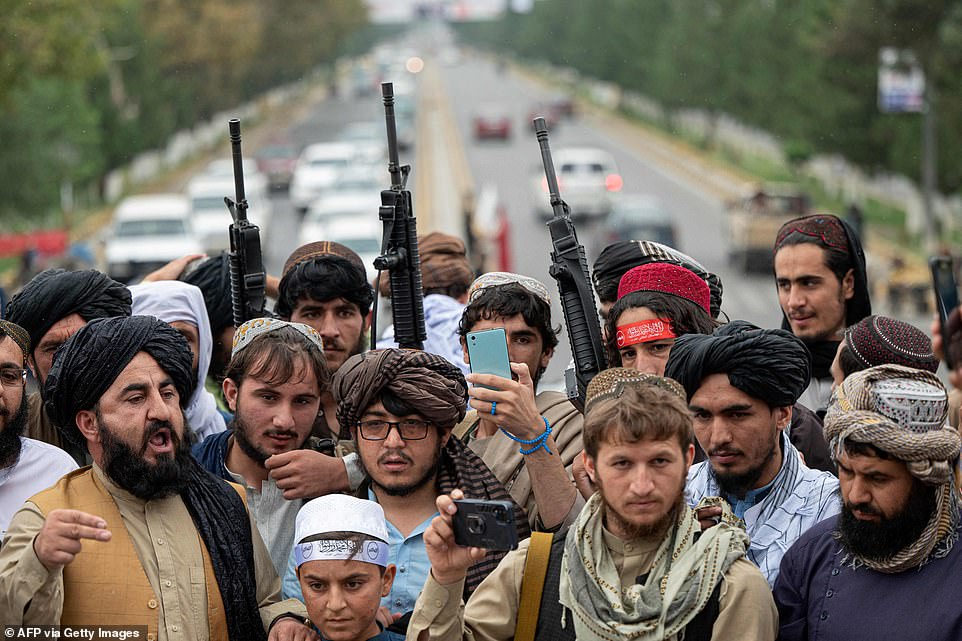 The Taliban has declared a day of national holiday to mark their ‘victory’ over the US in Afghanistan, even as the country back-slides into poverty with the rights of women crushed 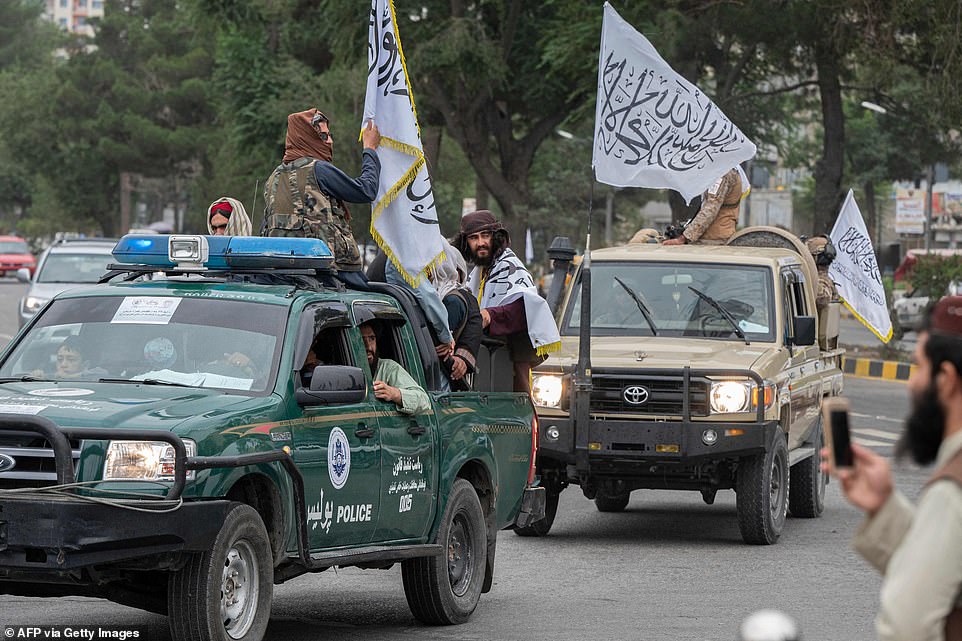 Taliban fighters ride in a convoy near the US embassy in Kabul, as some fired shots into the air in celebration 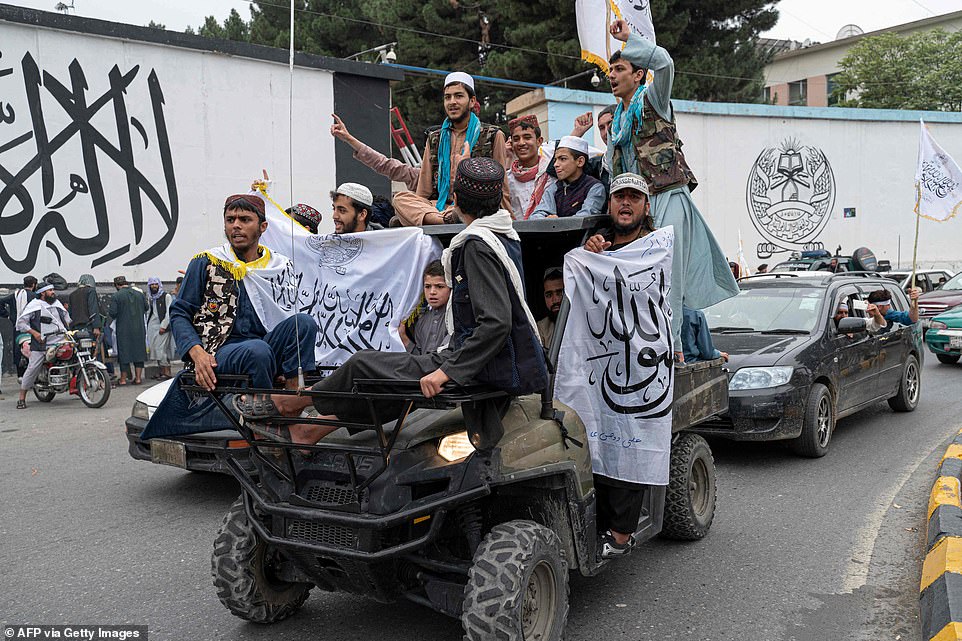 Taliban fighters ride in a convoy near the US embassy, a year to the day that they entered the city and re-took control of the country after Joe Biden ordered US troops to withdraw 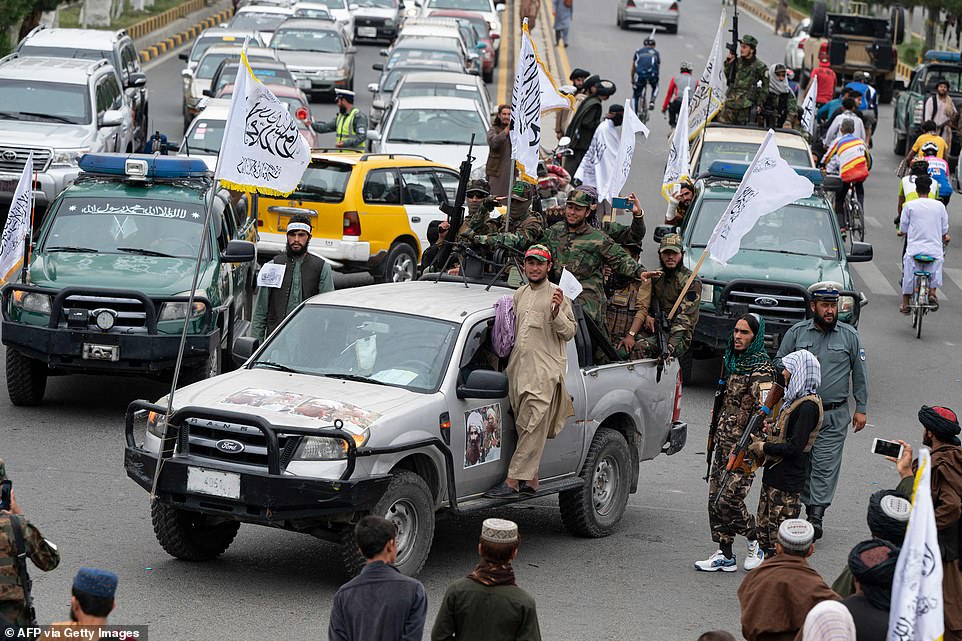 Initially, the Taliban promised a softer version of the harsh Islamist rule that characterised their first stint in power from 1996 to 2001.

But many restrictions have been imposed on women to comply with the movement’s austere vision of Islam.

Tens of thousands of girls have been shut out of secondary schools, while women have been barred from returning to many government jobs.

And in May, they were ordered to fully cover up in public, ideally with an all-encompassing burqa.

‘From the day they have come, life has lost its meaning,’ said Ogai Amail, a resident of Kabul.

‘Everything has been snatched from us, they have even entered our personal space,’ she added.

On Saturday, Taliban fighters beat women protesters and fired guns into the air to disperse a rally in Kabul.

While Afghans acknowledge a decline in violence since the Taliban seized power, the humanitarian crisis has left many helpless.

‘People coming to our shops are complaining so much of high prices that we shopkeepers have started hating ourselves,’ said Noor Mohammad, a shopkeeper from Kandahar, the de facto power centre of the Taliban.

The country is in economic crisis, with its overseas assets frozen by Washington and aid curtailed in order to keep funds out of the Taliban’s hands.

No nation has recognised the new government.

For Taliban fighters, however, the joy of victory overshadows the current economic crisis.

‘We might be poor, we might be facing hardships, but the white flag of Islam will now fly high forever in Afghanistan’, said a fighter guarding a public park in Kabul. 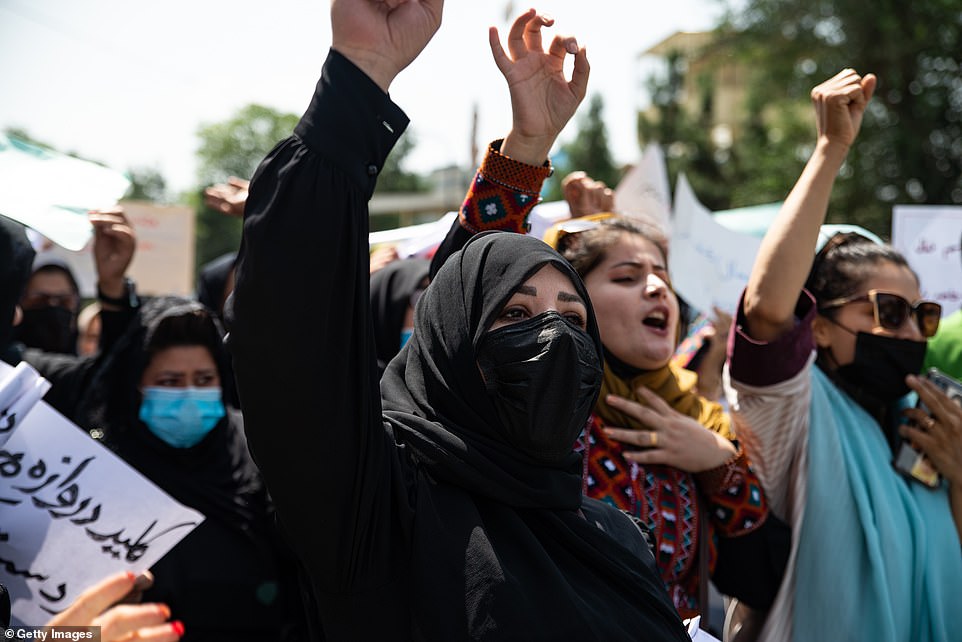 Though the Taliban promised to be a more-moderate version of their old hardline regime in Afghanistan, women have been brutally repressed since they re-took power – with burkas enforced, and jobs and schools close to them 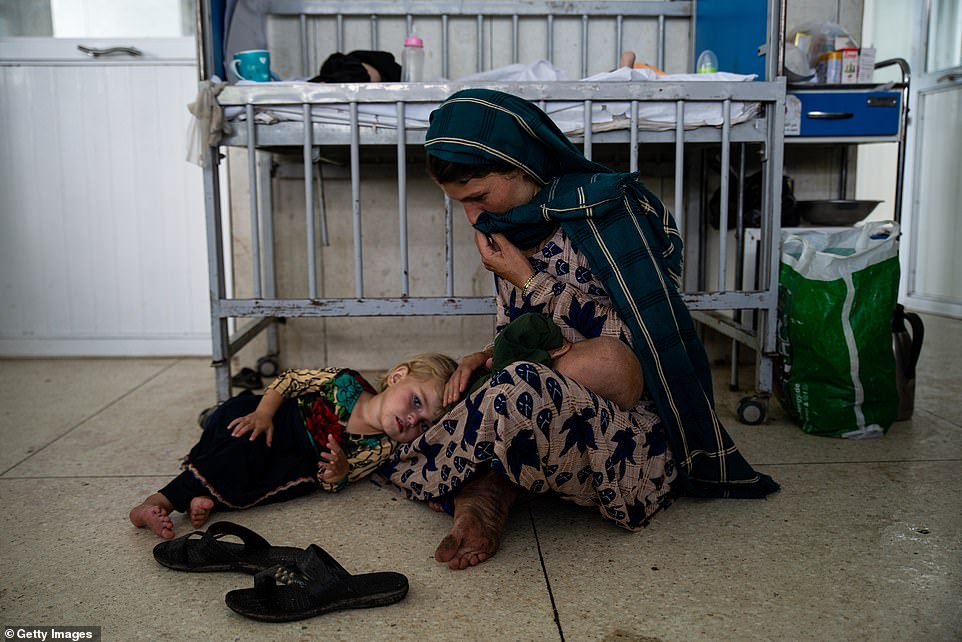 Millions of Afghans have also found themselves plunged into poverty as foreign aid money dries up due to fears the jihadists will use it to fund terror (pictured, a woman and her starving child in a hospital in Kabul) 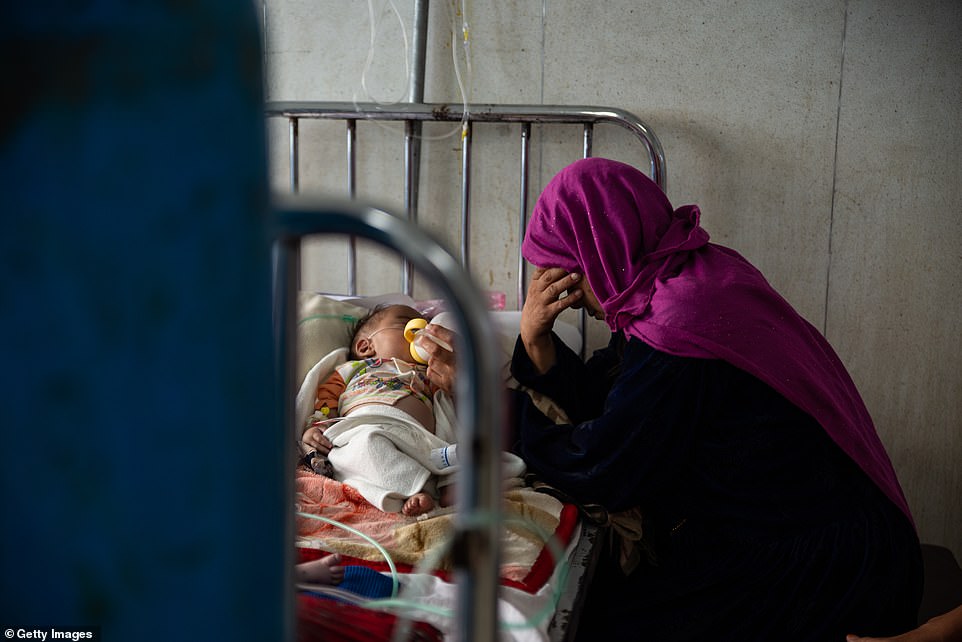 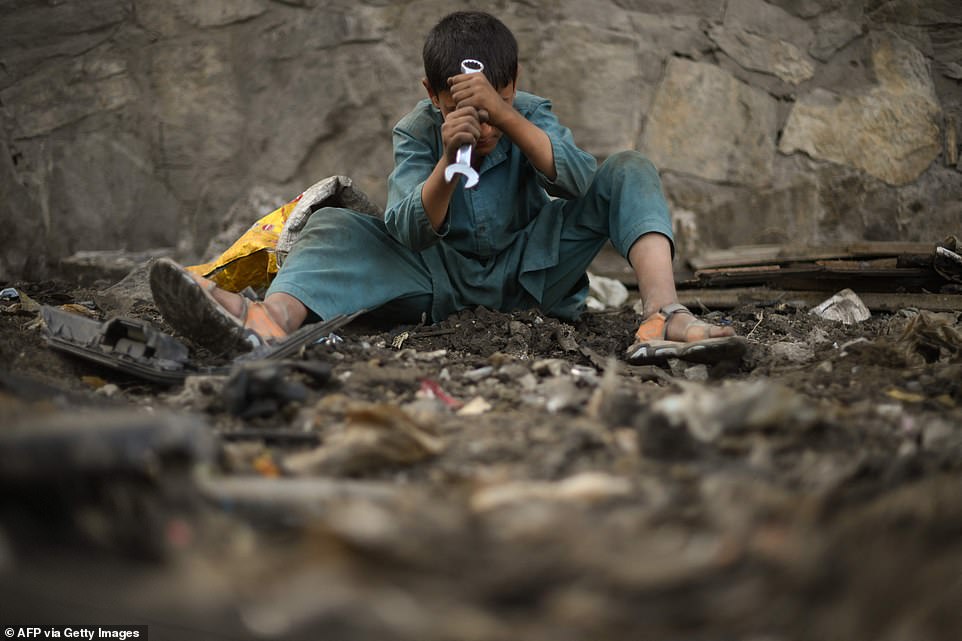 Even those who manage to avoid starvation face acute poverty and a hard way of life under Taliban rule (pictured, a young boy searches for scrap metal to sell on a trash heap in Kabul) 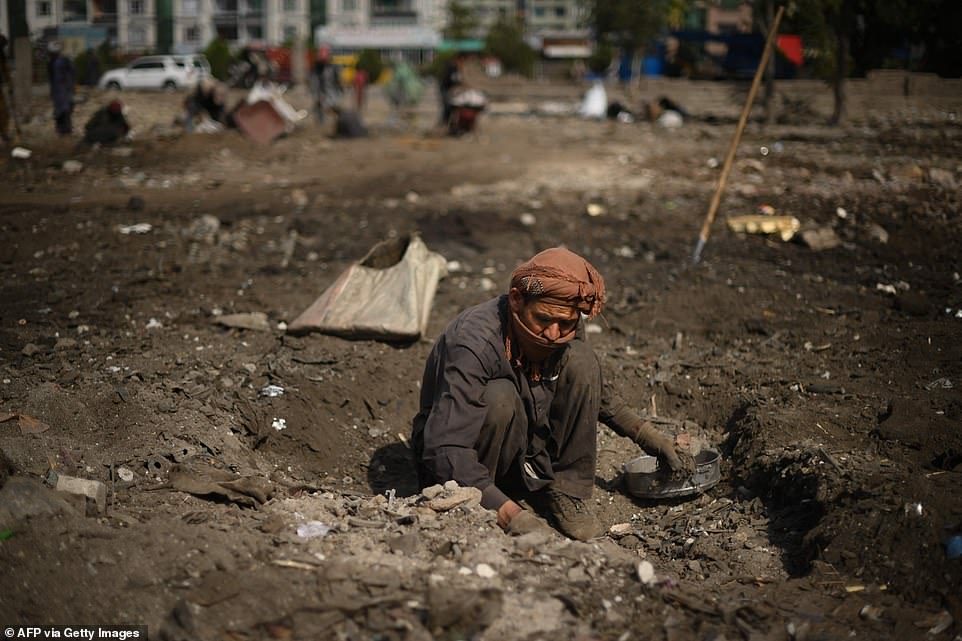 A man scavenges for scrap metals in Kabul, with millions of Afghans facing poverty after US troops withdrew – followed by most aid groups as the Taliban re-took control of the country

The $70 million Lotto Max jackpot is going unclaimed for another day. There was no winning ticket sold in Friday’s draw. Of the 40 available Maxmillion prizes of $1 million…

Regional outfits flex muscles again, chill in the air from Northeast for BJP