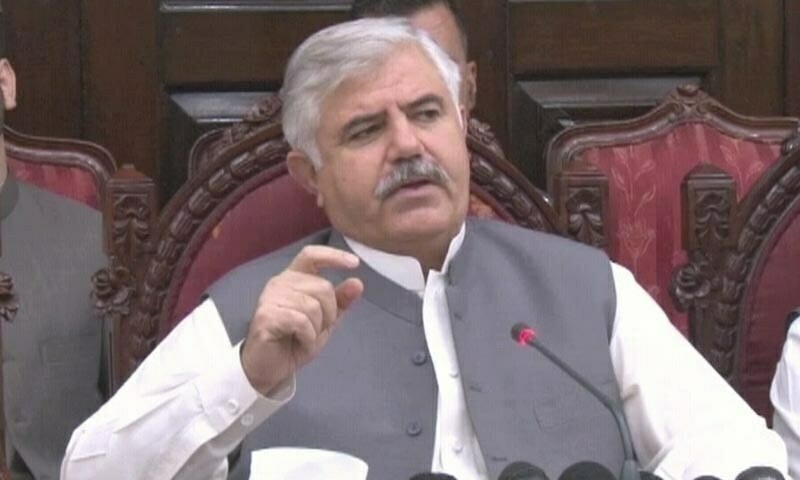 Battagram: Chief Minister Mahmood Khan has said that the government will give district status to Allai tehsil.

He was addressing a public meeting in Allai during his one-day visit to Battagram.

A 500 kW hydroelectric project has been completed at a cost of Rs 70 lakh. It will provide electricity to around 600 homes, several schools, health units and mosques in the area.

The Chief Minister also dedicated the newly constructed building of Government Degree College Banna Allai and seven camping pods at Gallai Maidan Allai, which have been completed at a cost of Rs 302 million.

Mahmood inaugurated several projects during his visit to Battagram

He inaugurated two bridges at Biyari Khwar and Sheer Khwar. He also inaugurated Batila Road. He performed Bhoomipujan of nine irrigation canals in different areas of the district.

Addressing the public meeting, he announced district status to Allai.

He said that the former rulers had not only plunged the country into the quagmire of foreign debt, but had also made the generations to come indebted.

He said that the present government is paying the installments of those loans.

The Chief Minister said that Prime Minister Imran Khan will bring the country out of the current crisis. He said that the government will leave a better and stronger Pakistan for the generations to come.

He said that the government is taking all possible steps to provide maximum relief to the people.

He said that many programs were run to reduce the problems of the people. He said that Sehat Card Plus and Kisan Card are important in this regard.

Mr Khan said that under Ehsaas programme, registration is being done to give subsidy on food items to eligible families.

He said that the provincial government would provide Rs 13 billion for this scheme.

He said that the government is providing new furniture to the schools at a cost of Rs.6 billion for the convenience of the students. He said that a policy is also being made for recruitment of local teachers in schools in remote areas.

The Chief Minister said that the provision of giving monthly stipend to the praying people would be started soon.

He said that a scholarship program has already been started for the students of madrasas.

Mr Khan said that eradication of corruption is one of the top priorities of the government.

He said that people should support the government to end corruption.

He said that the purpose of his visit to different districts of the state is to know the problems of the people and to solve them quickly.

He said that Malakand and Hazara divisions would be divided into two parts in consultation with the people so that their problems could be resolved at the local level.

Special Assistant to the Chief Minister Taj Mohammad Tarand was also present on the occasion.