By Joseph Michalitsianos For Dailymail.Com

A shaken walker was filmed being rescued by firefighters after he fell off a 100 foot cliff that crumbled beneath his feet.

The unidentified California man plunged from the drop at Moss Beach, San Mateo California on Saturday morning. He wasn’t seriously-injured – but was trapped by the edge of the Pacific with no way back up to safety.

Dramatic video posted by Cal Fire showed how an abseil was used to bring him to safety, after a female walker heard the victim crying for help.

Rescue services used a pulley system with interconnected ropes to latch onto the man and haul him up the steep cliff with the aide of a rescuer, who was strapped behind him.

While his condition remains unclear, the man was at least able to help himself up the cliff and communicate with authorities, though he seemed unsteady when he reached the summit. The man had also lost one of his sliders.

The man, whose face is blurred, was pulled back up the cliff with a rope pulley system, and a rescuer can be seen attached to him to help 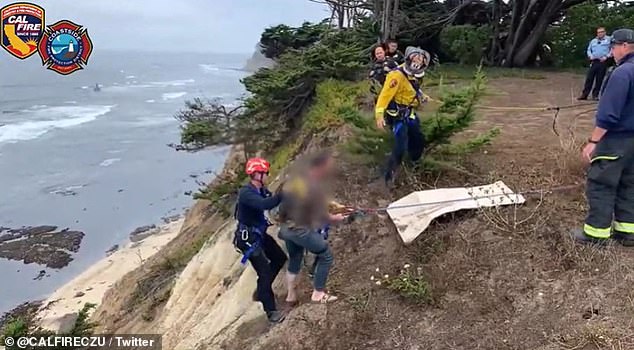 While his condition remains unclear, the man is seen in the video helping himself up the cliff and communicating with authorities 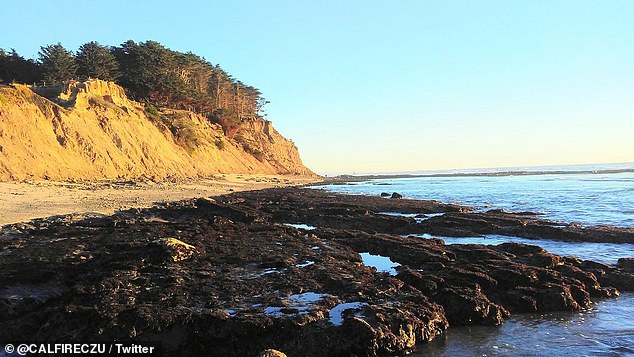 CLIFF RESCUE: The cliff crumbled beneath a man who was walking at dawn in Moss Beach. He fell est. 100 feet & yelled for help. At 8:30am a woman nearby heard his calls. Coastside Fire pulled him to safety within 22 minutes of their arrival. Avoid cliff edges as they are unstable. pic.twitter.com/OCz7W84dra

The video was released with a stark warning from CAL FIRE San Mateo, who said ‘avoid cliff edges as they are unstable.’

Cliff falls are especially common in California, as many of the picturesque waterside cliffs are structurally feeble and give way easily.

In May, a 25-year-old man was killed and three people were injured after they fell off a 300ft cliff in Southern California during an early morning hike.

That incident occurred near Paseo Del Mar in Palos Verdes Estates after one woman in the group slipped and plunged down the cliff while going to the bathroom in the dark.

A 25-year-old man from Los Angeles died at the scene and two women were critically injured and airlifted from the beach to a local hospital. Pictured: Emergency crews were seen carrying the body of the 25-year-old victim 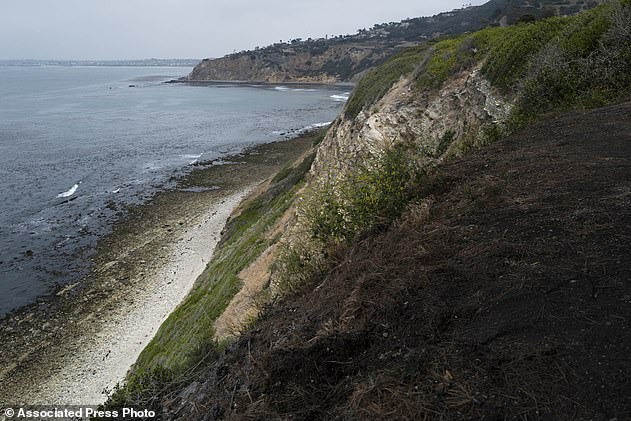 Pictured: The beach surrounded by cliffs in Palos Verdes Estates in California on Monday

Jerardo Huitzil, 25, from Los Angeles, died at the scene and two women were critically injured and airlifted from the beach to a local hospital after they scrambled to look for the woman who fell.

The fourth person, Vincent Avila, 25, suffered minor injuries and managed to climb back up from the beach below and alert a passing officer at 4.30am, said Captain Steve Barber of the Palos Verdes Estates Police Department.

Few men in power have delved deeply into gender equality on the main stage of the United Nations this month, but the ones who did went there boldly: claiming feminist…