The horrific disaster on the channel has raised tough and difficult questions as to why migrants are so desperate to reach Britain.

Nearly 26,000 people have taken the extremely dangerous journey so far this year – although the true number may be higher.

But just days before this week’s tragedy, a startling figure emerged.

Home Affairs Committee Chairman Yvette Cooper asked Junior Minister Tom Pursglow how many of these thousands of people were returned to the continent this year.

The truth is that once an asylum seeker reaches British soil, they are unlikely to leave – whether their claim is genuine or not. And that’s just one reason why so many people risk their lives to get here.

It is a safe, prosperous country, far more generous to asylum seekers than most of its neighbors, where claimants are allowed to work after the first year they are placed. This explains the attraction.

But why can’t we remove so-called ‘economic migrants’ while providing safe haven to those fleeing persecution?

Step by step, this is what happens when an expatriate lands on a British beach…

Some migrants enter Britain, disembark ships and flee to shore before being stopped by the authorities.

Then they disappear into the country. Of course, there are no official figures on how many of these ‘secrets’ make it here.

If they reach cities before they can meet with police or immigration officers, they could disappear into the black economy and live indefinitely.

Migrants at sea are given lifejackets and foil blankets for warmth by British authorities, then they are brought ashore – usually at the Home Office’s processing center at Tug Haven in the Port of Dover.

Here, they are provided with clothes and hot food – sometimes surprisingly expensive. This month, it emerged that the Home Office had ordered 3,000 chicken shish kebab meals, each costing £19.50, from a Kent chain of takeaways – as well as hundreds of Domino’s pizzas – to feed arrivals.

At Tug Haven, initial details are taken from new arrivals, who undergo welfare checks and are sorted into families or single people, mostly men. They then travel by coach to hotels around the UK.

Mobile phones – paid for by the taxpayer – are distributed so that the Home Office can keep in touch with the migrants.

Migrants also receive £39.63 per week from the Home Office to pay for essentials.

An additional amount is provided for meals for infants and caregivers, and expectant mothers can apply for a one-time payment of £300. 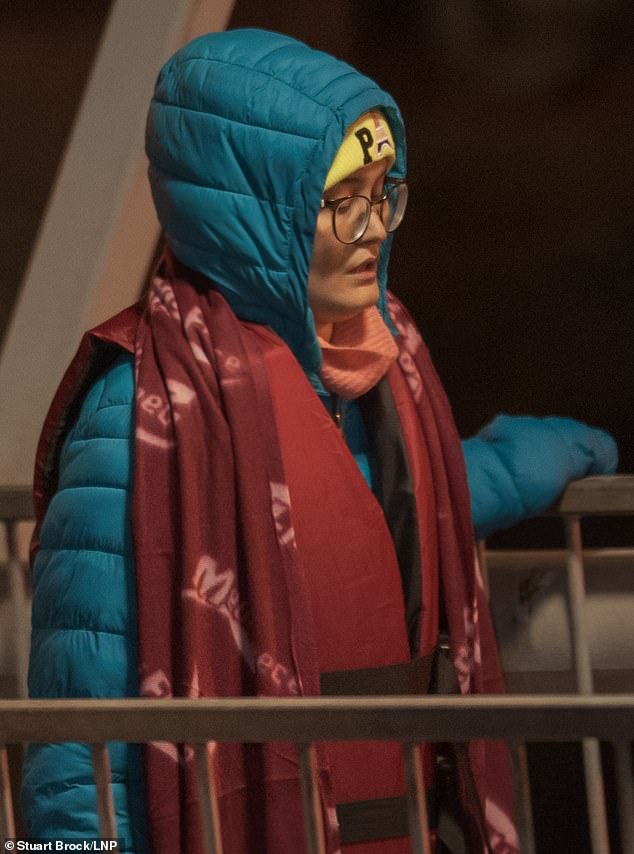 A group of migrants were brought ashore by the authorities after crossing the Channel in the middle of the night. He was brought to Dover Docks by the Border Force Boat Vigilant at 5 pm, followed by an RNLI lifeboat half an hour later.

Hotels have become the main form of accommodation for migrant arrivals since the crisis last year. Taxpayers are financing multi-million pound bills for thousands of rooms in three- and four-star accommodation, on full board.

Conditions are far more comfortable than in mainland Europe. For example, Greece opened a huge EU-funded asylum-processing center – which looks like a prison – on the island of Samos in the summer.

The huge cost of housing has contributed to a huge increase in the asylum bill – which rose 42 percent year-on-year to nearly £1.4 billion in March.

Most expatriates stay in hotels for months as their claims are processed. Here, some people – including Home Secretary Priti Patel – accused them of ‘playing with the system’.

Before the migrants left France, the smugglers gave them information to emphasize aspects that could make their case stronger, and even to destroy their passports.

Some claimants lie. Case files show that asylum seekers have told untruths about their nationality, religion, background, sexuality and age in an attempt to bolster their claims.

Some asylum seekers, who are apparently adults, have claimed that they are under the age of 18 and have been educated in secondary schools with British teenagers.

Last week Miss Patel said the suicide bomber who attacked a women’s hospital in Liverpool on Sunday’s commemoration took advantage of a “fun round” of asylum appeals, launching a series of legal challenges.

The 32-year-old terrorist, Imad al-Swelmeen, had been in the Home Office arrangement for seven years and had an excellent asylum appeal, meaning he could not be deported.

He also converted to Christianity in an apparent attempt to improve his case – although investigators have revealed that he was seen praying in a mosque in the months before his attack.

Claims continue to be processed – but progress is fraudulent.

Figures published yesterday show that at the end of September, more than 67,500 cases were awaiting a preliminary decision.

About 30,000 cases are more than a year old and, importantly, asylum seekers can apply for the right to work if the Home Office has not made a decision within a year.

In all, more than 125,000 claims – the equivalent of the population of Exeter or Solihull – are being processed, including those of unsuccessful appeals and asylum seekers. 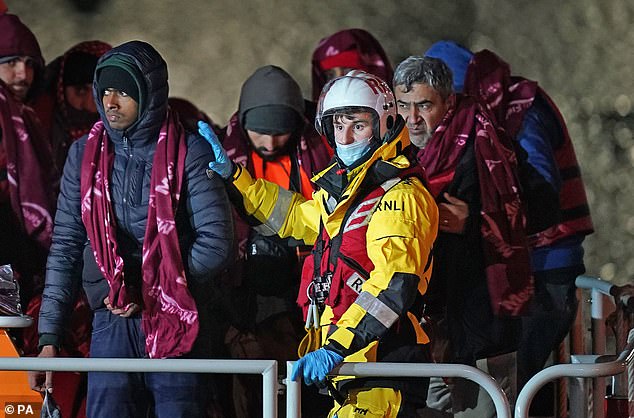 RNLI. A group of migrants brought to Dover, Kent yesterday by

If a case is denied, lawyers funded by legal aid will face challenges in immigration courts. This may include repeated claims for permanent years. Many would stick to the European Convention on Human Rights, which is enshrined in law by Labor’s 1998 Human Rights Act.

In many appeals that have been ultimately rejected, the unsuccessful asylum seeker still cannot be removed – for example because their home country is deemed unsafe. Other legal challenges are jaw-dropping.

Last year a Zimbabwean gun criminal won the latest skirmish in his 14-year battle to avoid deportation, telling the Supreme Court that back home he would be unable to access his HIV medication – despite the fact that 86 percent of HIV-positive Zimbabweans receive such treatment.

He was allowed to initiate another appeal. Even people entering the UK secretly eventually have legal options.

If they manage to stay under the radar for 20 years, they can apply for regular status, and even win an ‘indefinite leave to stay’ a decade later.

Is it any wonder that, despite the enormous risk, thousands are making the dangerous journey?