NEW YORK – If you’ve ever wondered why gefilte fish became a thing or whether it’s okay to use the word “goim”,“Welcome again”Chutzpod!“A weekly podcast in which actors Joshua Malina and Rabbi Shira Stutman reflect on life’s questions – big and small.

“Josh has a great line: We want to include someone who has ‘us’ on their mind,” Stutman said during a joint video call with Malina and The Times of Israel. “I think if Josh and I have one superpower, it’s that we are able to take serious topics and talk about ideas seriously, but with a sense of lightness that can make everyone feel welcome. It is.”

While the pair followed different career trajectories—Malina as an actor, who starred in “The West Wing,” “The Big Bang Theory,” and “Shameless,” and Stutman as the sixth in Washington, D.C. Acted as the founding rabbi of I. Synagogue. The two share a love for using Jewish texts and traditions to help reflect on current issues.

For example, in their first episode, which dropped on January 7, Stutman and Malina discussed the question of what, or who, was considered the “other” and talked about whether the weekly Torah portion was “bo”. Was. How can inform how people interact with each other. – Especially a year after the uprising in the US Capitol. In doing so, he noted the importance of listening to people with differing views. They also revealed their shared passion for the reality television show, with Stutman proposing that they try out for “The Amazing Race”.

The show will feature surprise guests, including entertainers, lawmakers, and writers, and is geared to everyone, regardless of their level of adherence or religion – it is as much for scholars of the Hebrew school as it is for scholars. . like to shop.

“We want to reach anyone beyond the Jewish community who either has a friend, a loved one, a spouse who is Jewish, or even some other faith or belief. Trying to reach someone who has an interest in how Jews can see the world and interact with life,” said Malina, who grew up in Westchester, New York, over the course of eight years. Studied in religious school till

The following conversation has been edited for clarity.

The Times of Israel: So, you want to reach out to observant Jews, secular Jews and non-Jews alike.

I went to an Orthodox yeshiva [religious school]I am not a Jewish scholar, but I am certainly familiar with the texts. I kept telling the rabbi that I wanted it to be interesting to me as well. I want to make sure I’m learning. We didn’t want to make it Judaism 101 or repeat what you might have learned elsewhere.

Rabbi Shira Stutman: The target audience is really people who have questions about what it means to be alive.

So if you are 100 percent who is not a spiritual person – and there are many people in the world – or if you are someone who is happy to go about their day and not think about how you will look different or how you can change Well, this is not your podcast.

However, there are some people who are outside the tent we are trying to build, who are not sure if they want to come in. I saw Josh chatting with some people on Twitter who tweeted that they heard our first episode and they only barely understood what was going on, but they’re back again.

Raspberries: I know. I answered one person and said, ‘Wait, we’ll improve,’ because it’s not on them. It is up to us to make it interesting and understandable for the audience.

Twitter gives you endless feedback, both welcome and not welcome. Given that the two of you have public photos, how much attention do you pay to that?

Raspberries: It comes with the territory. I have made rhinoceros skin such that I am not only impervious to negative feedback, but I seek it out. I appreciate it. I am a rare breed indeed.

Recently Rabbi, executive producer Tim Schrove, and I were on a Zoom call, and I read an email that was very negative about the podcast. I saw the face of the Rabbi falling. And I said, no, that’s great. It means we are provocateurs. If someone hates you, you’re at least doing something interesting. This person not only hated it, but they sat down to express what they didn’t like about it and by the end of the email, they also said, ‘I’d love to be a guest on your show.’

I think turning off feedback is a good way to go if it’s part of your self-care ritual, but it’s not mine. I love to hear how people react – good or bad.

Sixth and I am Rabbi Shira Stuttmann. (Via VI and I/JTA)

Stutman: If someone comments, ‘I don’t understand what you said’, we really take it to heart. However, I think the hateful things, the hateful comments that we can’t do anything about, really give us a pat on our back.

Speaking of hate, in your last episode about Torah part “Bo”, you talk about your tendency to isolate others when things get bad. Rabbi, you talked about the need to resist that tendency and Joshua, you talked about God’s calling to kill the enemy. Who or what do you consider to be the real enemy now?

Stutman: I think the word enemy is a really strong word, but I think an obvious answer is white supremacy and the way our country functions clearly and systematically.

Raspberries: It’s hard to answer, but I think the question is important. In the next episode the rabbi says that maybe we’re going to touch on anti-Semitism every single episode. He joked, but, I said yes, I think it’s going to happen because there’s no shortage of it.

Anti-Semitic sentiment has been around for quite some time and it looks like it is here to stay. But it is important to analyze what anti-Semitism is because once you start looking for it you can find it everywhere. It is important to analyze what is a serious threat, what is simply ignorance and what cannot even be anti-Semitism. When you get down to criticism of Israel it becomes ambiguous because one has to differentiate between legitimate criticism and the very frequent overlap of anti-Semitism.

With a rise in anti-Semitic sentiment, concerns about the future of democracy in this country, and COVID-19 and the Omicron version, many people think they belong in the trash compactor scene in “Star Wars.” Do you see podcasting as a balm for people?

Stutman: I was thinking the same thing last night when I was sleeping. We didn’t mention COVID at all in this week’s or last week’s episode. I was wondering if we should put an addendum on this that says we know Omicron is affecting us, or should we put in a I Sheberach [public prayer for health and well-being] Where do we pray for people? And I thought, you know, like you said, it’s okay to have a balm. It’s okay that for a while we talk about trees and get bogged down in difficult topics and then come back to laughter. 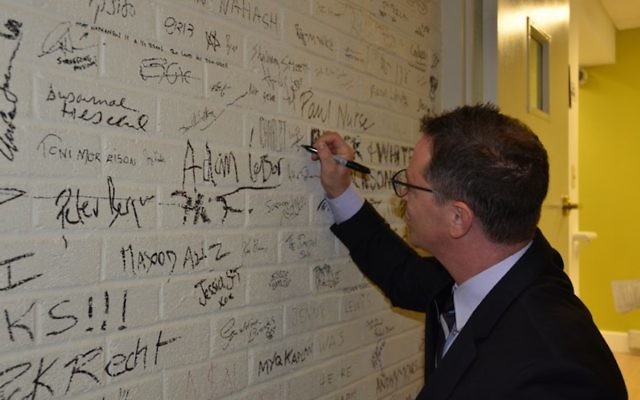 Joshua Molina signed his name on the wall of Sixth & I, a historic Washington, DC, synagogue, at a Shawvote event in 2016. (Courtesy of VI and via I/JTA)

Raspberries: One of the greatest acts of self-care that I did during the pandemic was that I agreed to do a podcast, because I initially said no. I didn’t know I had the bandwidth to engage at the level it would need. Then a few days later I wrote back and I said if you can’t find any more, I’d like to change my mind. I want to do this work. I had a feeling that I could gain something from the process of engaging with the rabbi each week.

I was just saying to my mother today, I am learning a lot from Rabbi Shira. For a Jew who takes pride in living an actual Jewish life, I do not engage with the Torah regularly. Now I’m doing it with an incredible teacher. I am learning and I am emotionally excited by these discussions.

I can’t believe I almost said no to this opportunity.

Can you talk about how the show addresses questions of faith, what it means to be Jewish, and the difference between culture and religion?

Stutman: I think one question that remains for many Jews in contemporary America is the question of faith. Do I believe in God? If I do, what does God look like? Why do bad things happen to good people? Then I guess the second question is, what is Judaism? Especially for those who, because we live in a Christian country, consider it a religion like Christianity. So there are questions of faith, but also questions of what it means to be Jewish when Judaism does not conform to Christianity.

Would you say that the two of you are learning from each other?

Stutman: If you listen to the first episode, Josh takes a text at least two or three times that I’ve seen 75,000 times in my life and is able to pull out something I’ve never seen before. This is an indication of what the study of the Torah looks like. If a Torah class is just me, the Rabbi, lecturing people without adding to my insight and experience, then we have not achieved the goal. I think these conversations are made 100,000 times richer by the fact that there are two voices going back and forth. I see that often the eyes that are new are the eyes that go deeper.