Thirteen years ago on 26 November, 10 Lashkar-e-Taiba terrorists broke into the country’s financial capital and ravaged it – for three consecutive days, the city of Mumbai was in the grip of terror. In this violence 166 people including foreigners lost their lives.

The image of the front dome of the Taj Mahal Palace Hotel surrounded by a huge plume of smoke is etched in the memory of every Mumbaikar. For more than 60 hours, the symbol of prosperity in Mumbai lay at the mercy of four heavily armed terrorists.

9:38 PM: Two of the four terrorists Abdul Rehman Bada and Abu Ali reached the main gate of the tower section by placing a crude RDX bomb in front of the nearby police post. Armed with AK-47s, ammunition and grenades, he made his way into the lobby area, firing at anyone and anyone who saw him.

9:43 PM: The other two terrorists, Shoaib and Umar, entered the palace’s La-Pat door and began shooting guests in the poolside area. The fact that the terrorists were aware that the La Pat door, which is normally closed to the public, was open for some corporate meetings and a wedding on that particular day, suggests the plan behind the attacks. There was evidence of complexity.

By the poolside, the terrorists along with security guard Ravindra Kumar and his Labrador retriever were the first to kill four foreigners.

12:00 am: The Mumbai Police surrounded the Taj till midnight. By this time many guests inside the hotel had been locked in small rooms by the staff.

1:00 am: The central dome of the hotel was bombed and the building caught fire.

3:00 am: Army and fire brigade personnel reached the spot.

4:00 am: The first round of evacuation took place. Two groups were formed by Marine commandos. The first team was ejected safely. The other group was spotted by the terrorists while they were on their way out. Tandoor Chef Gautam Singh at Taj was one of them. He was shot.

6:30 am: A team of 200 commandos reached Mumbai from New Delhi and commanded the rescue operations at Taj and Oberoi. The government had given orders to raid the building. In the following hours, the evacuation took place in batches.

10:30 am: Fresh rounds of gun battles were reported from inside the building.

4:30 PM: The terrorists set fire to a room on the fourth floor of the building.

7:30 pm: Another round of explosions and firing ensued.

8:00 am: Indian commandos announce that Taj has been cleared of all terrorists.

The NSG and medical teams sanitized the building after a complete evacuation, but the fire department was still controlling the last fire in the building. Body bags kept coming to St George’s Hospital and JJ Hospital. Wards were filled to their capacity as patients were lying in sheets covered with blood and tears.

The Oberoi-Trident is another symbol of luxury and opulence in Mumbai that came under the deadly jigsaw of 26/11 attacks. The rescue operation on the Oberoi-Trident was extremely slow, being much larger than the Taj Mahal Hotel in terms of spatial capacity. The two hotels are intertwined, with 800 rooms between them. Almost a greater number of hostages were laid siege here than in the Taj.

The Oberoi-Trident hosts a large number of foreign tourists visiting India and this was the case on the night of 26/11. Foreign nationals were said to be the prime target of terrorists. By the time the siege at Oberoi-Trident ended, 143 hostages had been rescued alive and 24 bodies had been recovered. 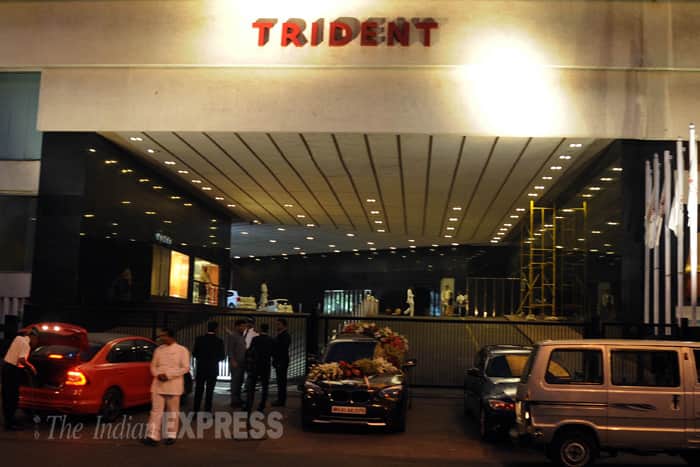 10:10 PM: A barrage of bullets began at the entrance of the Trident, with the gatekeeper being the first to fall. Two gunmen entered the reception area and started firing. Hotel staff including bellboys and hotel management trainees were injured when two gunmen barged into the opium den bar, Tiffin and later the Kandahar restaurant.

Two gunmen marched up the mezzanine level to the spa and killed two Thai masseurs, after which they detonated a grenade on the lobby level.

12:00 am: The Rapid Action Force positioned itself outside the building. Friends and relatives of those trapped inside stood in the street to hear about their loved ones, hoping that they would be rescued.

6:00 am: After the NSG operation in Oberoi, the police withdrew.

6:45 p.m.: The battle of explosions and bullets continues throughout the day. There are reports of injuries to many NSG and Army personnel. The evacuation of hostages takes place in batches. A total of 31 people have been rescued so far.

3:00 pm: The rescue operation ended at Oberoi and both the terrorists were killed. As Ritu Sarin reports, at the end of the 40-hour trigger alert at Oberoi, the site was like a camp destroyed.

The attack was specific in nature as it was on the Chabad House (a Jewish community centre) run by Rabbi Gavriel Noach Holtzberg and his wife Rivka Holtzberg. Located in Colaba, this house was visited by a large number of Jews, especially Israelis, but also people from all over the world.

News of the attack on the Chabad House echoed internationally in similar Jewish centers around the world in more than 70 countries. Jews in India had never been the target of an attack by a terrorist group before. Rabbi Israel Kozlowski, who now runs Chabad House, said the reconstruction of the six-story Nariman House would be a $2.5 million Jewish museum as well as Mumbai’s first memorial to those killed in the attacks. (Express photo by Prashant Nadkar)

9:45 pm: When dinner had just ended and the rabbi was getting ready to go to bed with his wife, his two-year-old son, Moses and six guests, a gunshot was heard. When one of the gunmen came upstairs, a bomb went off at the petrol pump near the building. A few seconds later, an RDX-laden device exploded near the base of the Nariman House staircase. After this the terrorists accused of firing in the air above.

The rabbi and his wife, along with their guests, were held hostage for the next 40 hours at the Chabad House. The couple’s son, Moses, and the cook managed to escape twelve hours into the siege. According to eyewitnesses, the boy’s pants were covered in blood when he came out.

5:30 pm: A batch of 20 commandos were sent who tried to enter the building from the ground floor. Terrorists destroyed the lift and entry point of Nariman House.

12:00 am: Nine hostages were freed from the first floor.

7:30 am: Unable to enter the building from the ground floor, the NSG commandos were helicoptered to the roof of the building.

1:00 pm: Intermittent firing and grenade explosions continued throughout the day.

3:30 p.m.: After a fifteen-minute shooting spree, the NSG commandos hung a red flag from the fifth-floor window to signal the final attack to the NSG officials.

5:45 PM: The explosion blew away the fourth floor of the building. The explosion was so strong that the stairs to the upper floor could be exposed.

6:00 pm: An NSG guard went to the terrace and showed his thumb impression declaring the operation successful.

9 o’clock: NSG chief JK Dutta reached the spot and declared the rescue operation at Nariman House to be over successfully. However, the rabbi, his wife and five of the hostages were found dead. One commando Joginder Singh was martyred, while two others were injured. 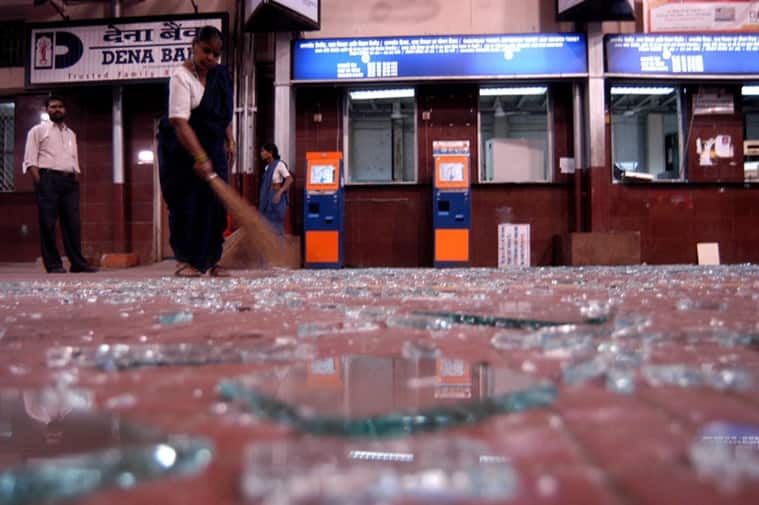 After the massacre of 26/11 Mumbai attacks C.S.T. Express Photo by Pradeep Kocharekar

When Indian Express Entered the building less than 24 hours later, the site looked like a global conflict zone. More than 30 grenades were thrown. There were small potholes on the floor and bullet marks on the walls. The smell of the mutilated bodies was unbearable. The bodies of both the terrorists were lying on the fourth floor.